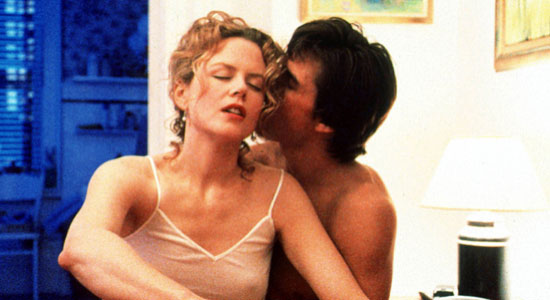 It’s difficult to discuss a Stanley Kubrick film without speaking of its director. Beginning with his first widely successful effort, Spartacus in 1960, through Lolita, Dr. Strangelove, 2001: A Space Odyssey, A Clockwork Orange, Barry Lyndon, The Shining, Full Metal Jacket and his final work, Eyes Wide Shut, he made only nine films over those 40 years—all classics. The director’s fear of flying forced him to build a mock-up of New York’s Greenwich Village at England’s Pinewood Studios for Eyes Wide Shut. It’s a brilliant farewell from Kubrick, with as much percolating eeriness as anything by David Lynch.

Tom Cruise shines as Dr. Bill Harford, married to Alice (the always reliable Nicole Kidman). The Harfords have been invited to the Christmas extravaganza of Victor Ziegler, one of Dr. Bill’s wealthy patients. “Why do you think he invites us to these things every year? Do you know anybody here?” asks Alice just as the society band strikes up “I’m In The Mood For Love.” “Not a soul,” replies Bill.

Ziegler and his wife greet them with arms wide open. “Alice, look at you. You’re absolutely stunning,” says Victor (Sydney Pollack). “And I don’t say that to all the women, do I?” he asks his wife. “Yes, he does,” she chimes in. “Hey, that osteopath you sent me to, to work on my arm, you ought to see my serve now,” he says to Bill, punctuating the remark with an overhead tennis stroke. “He’s the top man in New York,” says Bill. “Oh, I could have told you that just by looking at his bill,” groans Victor.

Alice, slightly tipsy on champagne, trips the light fantastic in the arms of a suave Hungarian who can’t help but evoke a couplet from one of My Fair Lady‘s forgotten numbers (“There he was, that hairy hound from Budapest/Never have I ever known a ruder pest”). Her husband, meanwhile, is being lured slowly into an empty room by a pair of pretty young things, when one of Ziegler’s employees interrupts, asking him to come upstairs immediately.

Very agitated, Victor is pulling on his pants as Bill enters the room. A beautiful girl is sprawled, naked on the couch, totally unresponsive. “She shot up something … a speedball, I think,” says Victor. Bill kneels down and forces her to make eye contact. “Look at me, look at me, Mandy. Good, good!” he says, quietly insistent. Eventually, she comes around. “Well, that was one helluva a scare you gave us, kiddo,” says Victor, eager to get her dressed and on her way. “Better give her another hour,” says Bill as the host looks at his watch. “Listen, I can’t thank you enough. You really saved my ass,” Victor tells the doctor. Bill will one day be equally grateful to this near-casualty of a girl.