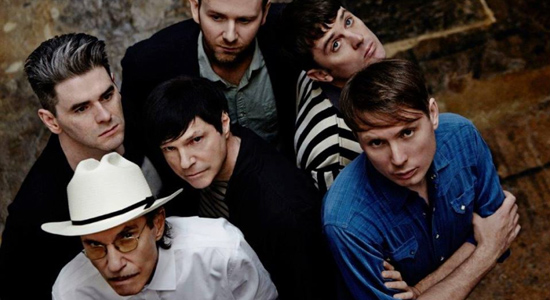 Ron and Russell Mael formed Sparks in 1970, and since then have crafted iconic albums well-versed in high-pitched power pop, glam rock, art skronk, electronic disco and beyond, with startlingly sardonic lyrics. That’s their thing. What’s not been their thing in a 45-year existence is collaboration outside of the brothers’ very immediate circle. (Todd Rundgren, Giorgio Moroder and Jane Wiedlin aside.) Enter Franz Ferdinand, the hit-making, dancey post-punk ensemble and admitted Sparks fans, whose eponymous first album just happened to thrill the Maels. Along with forming a mutual admiration society, the bands united as one—under the name FFS—for a seamlessly interconnected self-titled album that sounds like both and neither simultaneously. We spoke to Russell and FF frontman Alex Kapranos about the union.

Russell, there’s this great Sparks-fan documentary being made by two documentarians, one in Israel, another in Philly. Have Sparks hooked up with them for your side of the story?
Russell Mael: I’m aware of that thing. We’ve chosen not to be part of it. There are slews of people who want to do documentaries on us.

Look at you.
Russell Mael: I’m not dissing it. We’re happy someone wants to do a film on us. It’s just that we have to pick and choose because of how we might be represented. We don’t really have time to sit over somebody’s shoulder. We could do the film on our own if that’s the case.

Which you are doing with one of two musical movies you’re making soon.
Russell Mael: Yes, neither of which I can talk about until the ink is dry. We like different parameters and conventions—nothing strict or defined that doesn’t allow us to retain 1,000 percent of our personality. Funny thing is, with the musical genre, there are negative connotations surrounding it—the razzmatazz of Broadway, the cringe-worthy stuff of people breaking into song and all those affectations.

Are you saying Sparks doesn’t like razzmatazz?
Russell Mael: Razzmatazz is so 2014.

Alex, let me duck back to that fandom thing. When did you get turned on to the Maels?
Kapranos: I actually didn’t come across Sparks until I was a little bit older. I was too young for their big British hits like Kimono My House or even the Moroder era. However, in my early 20s, I happened onto a secondhand copy of “Amateur Hour”—I would buy anything on the old Island label—and it was totally amazing, a genuinely different approach to songwriting. I realized too that they were still going, a band with great history, still active and still innovating.

What’s interesting, too, is that Sparks loved your first album and “Take Me Out.”
Kapranos: Really? I mean, they never expressed that to us per se. It’s a very male thing to tell other people about how you feel about them, but not the guy himself. Then again, American men are surely more emancipated.

You guys rarely work with people outside the brotherhood. I wouldn’t say you operate in a vacuum, but you do stick to your own lane. This sounds Oprah-ish, but is it hard to let people in? And why Franz?
Russell Mael: It’s not, in a certain way. We just happen to have an unwritten credo of what we stand for—our image, lyrics, melodies—and we have fashioned our own world. In that sense, it’s hard to open yourself to outside influences or input. The vision is strong. You want it to stay pure. (Upon meeting FF), there’s a kinship that’s hard to verbalize. Ron and I knew when we heard and met them that we wanted to see what it would be like working with them, as we got along personally and musically. Out tastes overlap. It wasn’t a stretch.

I know working together has been a long-delayed process from when the idea came about. What broke the ice?
Kapranos: It was supposed to have happened 10 years ago, but things got crazy for us. I’m sure the same happened with Sparks. We barely had time to record our own music, let alone one with someone we respected. When we met up again right before Coachella, we committed to making a time for the album. And as soon as we started sending songs back and forth, it came together quickly—like really quickly considering that’s two bands with their own identity doing something with its own separate identity.

How did the “Piss Off” demo you guys recorded set the tone for what followed?
Russell Mael: I’m not sure it did, although the album definitely has an irreverent spirit. Not every song is about frustration symbolized by something foul. Yet it does resonate.

Is it fair to say you share a sense of humor?
Russell Mael: The laughs were kept to an agreed 12 to 15 per day due to the tight recording schedule.
Kapranos: We do. Remember, too, that the lyrics are occasionally dark. It’s funny, though, when I think of a song such as “Collaborations Don’t Work.” They started the ball rolling, and their first whack at it was really ballsy. We had a good laugh. Then we hit it back hard and worried whether Ron and Russ were going to love it or totally hate it and never speak to us again. Humor prevailed and they loved it.

Ego—do you have to put it aside to be FFS?
Kapranos: Both bands have gargantuan egos. I’m wary of bands who say they don’t have one. For any band to work, you better have loads of it.

You said something previously about upholding your image. What is that? Does FFS suit it?
Russell Mael: I don’t know if it’s always up to us. You see Ron: what he says, wears and plays. He is that guy. I am this guy. The world we’ve made is us. We’re not in a boardroom and haven’t calculated it. There isn’t a Sparks brand or some method. What is methodical is that we work all the time to come up with new material, new ideas and new angles of presenting what it is that we do. FFS is definitely that.