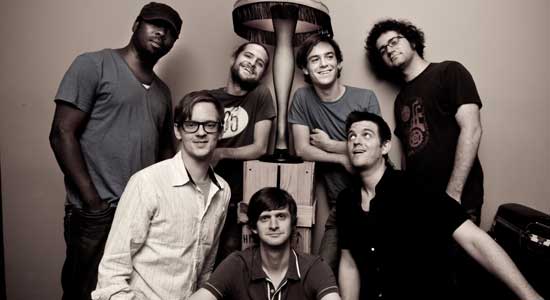 One Nation Under A Groove
The 36th edition of the Festival International de Jazz de Montreal is officially in full swing. The fest is 10 days and nights, running from June 26 through July 5, and although jazz is the byword, the ambitious music programming also encompasses rock, blues, pop, flamenco, folk, hip hop and EDM for a well-rounded, populist experience. Big fun for serious music lovers with plenty of distractions for the whole family, the Montreal fest features hundreds of concerts, many of which are free on outdoor stages as well as a number ticketed gigs held within a range of indoor venues. Hosting recognizable mainstream artists like the Steve Miller Band, Erykah Badu and hometown favorites like the Barr Brothers, the Montreal fest has fought off some rainy weather and ultimately seems just too big to fail.

Hardcore jazzers have had their hands full with tons of quality options. Italian trumpeters like Enrico Rava and Paulo Fresu both attracted attention, as did American horn-man Christian Scott, the hip-hop-inflected Robert Glasper Trio, the Bad Plus with guest saxophonist Joshua Redman, and the Joe Lovano-John Scofield Quartet. Veteran fusion stars Stanley Jordan, Al Di Melola and Stanley Clarke were all crowd pleasers, as was contemporary axe-man Kurt Rosenwinkle, who hosted three consecutive nights for his part of the vaunted Invitation Series. Jazz elders Gary Bartz, Al Foster, Buster Williams and Larry Willis brought the old-school back to life as the Heads Of State, progressive cornet player Ron Miles mixed it up nicely with guitar hero Bill Frisell and drummer Brian Blade at the Monument-National, and the amazing Wayne Shorter Quartet was once again a festival highlight.

Still, the Montreal crowd loves to move and groove, and nothing got them going like the Snarky Puppy show at the Metropolis dancehall. A swirling, funky big band with two drummers, two keyboardists and a thriving horn section, these guys have quietly grown from playing under the radar to recent Grammy nominations and nonstop touring. Playing original material as well as snatches of P-Funk and even the pounding melody of “Owner Of A Lonely Heart,” these guys brought all the different jazz generations together, as in, “one nation under a groove.”

That’s the Montreal Jazz Fest, pure and simple, which keeps on trucking through the holiday weekend—how about you?