They Might Be Giants have resurrected their ingenious Dial-A-Song concept by streaming a new song each week of 2015 at www.dialasong.com. MAGNET’s Matthew Fritch reviews them all.

I wasn’t missing it. I wasn’t listening. I turned away when I heard them say, “It’s Dial-A-Song.” I always had my doubts, so I just tuned it out. I didn’t know why they had to crow about Dial-A-Song …

Yes, it’s been more than three weeks since we last Phoned It In. The TMBG lyrics above (from the 2015 teaser song “I Wasn’t Listening”) aren’t exactly an accurate portrayal of a prevailing attitude toward Dial-A-Song, but there is some fatigue. The good news is that we have now reached Week 26, and by my math, that’s the halfway point. We have some statistics to look at and arguments to start and feelings to hurt.

A brief diversion: At one point, I considered turning this enterprise into a long-term parody of advanced sports metrics by inventing statistical measures such as SAR (Sings Above Replacement), NFPS (Normalized Flansburgh Per Song) and pythagorean expectation to rock. Each week would become a more ridiculous accounting of performance, straying ever farther from what little aesthetic pleasure remains in music criticism. I’d make some tight infographics. The idea was scotched for two reasons: 1) It’s a long con; 2) The stats inevitably served to pit the Johns against one another (n=2), and that didn’t seem cool. (Not that anything else around here is cool, either.) Someone else please do this, though. To quote David Brent, “A good idea is a good idea forever.”

You know what’s not a good idea? (Aside from that too-obvious segue?) Cramming a short story about a ghost car into a song, as happens with “The Summer Breeze.” The Destiny’s Child cover (“Bills, Bills, Bills”) left me slightly cold, too. It’s angsty, but not in a fun way. Fortunately, “And Mom And Kid,” written for an HBO documentary celebrating family diversity, is both historically timely and impressive in its compactness and charm.

And now for the 2015 Dial-A-Song midterm report: 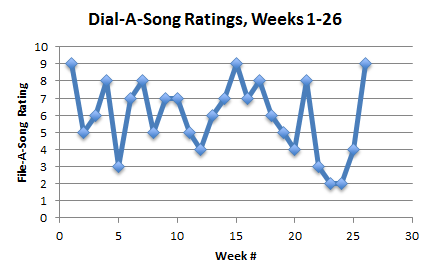 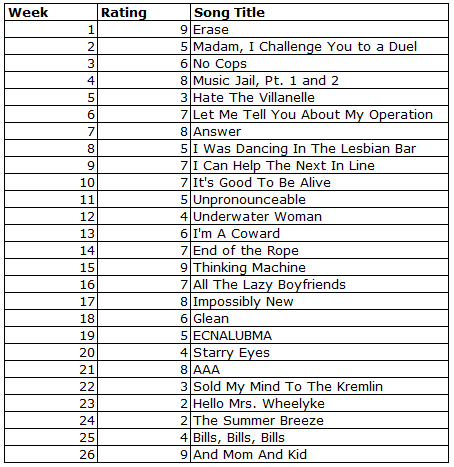