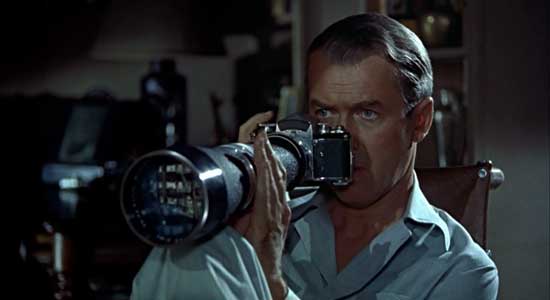 Director Alfred Hitchcock never made more out of a less-promising canvas than he did with Rear Window. From a vantage point of a second-story New York City apartment, the camera roves around a smorgasbord of open windows across the courtyard during a sticky summer morning. A lithe black tomcat slips up a staircase for an all-day nap after a night on the town. A milkman’s bottles clank as he makes his morning deliveries. The camera briefly returns to home base as sweat beads up on the forehead of L.B. “Jeff” Jefferies (Jimmy Stewart), sleeping fitfully next to his rear window.

It’s back outside into the courtyard as a radio bellows, “Men, are you over 40?!” and a paunchy man in a tanktop undershirt, who answers the radio’s desscription, lathers his whiskers with a shaving brush. An elderly man sits bolt upright on the fire escape, followed by his wife, sleeping head to toe. A shapely girl with a blond pixie cut pirouettes into her living room while attempting to snap on her strapless bra. She drops the undergarment on the kitchen floor, then readjusts it faster than Nijinsky could ever have done.

Jefferies is now seen in a hip-to-toe plaster cast of his left leg, bearing an inscription: “Here lie the broken bones of L.B. Jefferies,” with the second “e” squeezed in later to correct a typo. His apartment’s walls are covered with framed black-and-white photographs. Two Formula One racing cars careen upward like dinosaurs after a violent collision. Three people are running desperately from a burning vehicle in another photo, and a third depicts a man, maybe a police officer, falling into the path of a ’53 DeSoto. A coffee table bears a stack of LIFE magazine’s recent “Paris Fashions” issue piled next to a very expensive camera with flash attachment.

Later that morning, Jefferies is trying to run an electric razor over a sweaty upper lip as his telephone rings. “Congratulations on getting rid of that cast,” says Jeff’s principal magazine editor. “Who said I was getting rid of it?” replies Jeff. “This is Wednesday, seven weeks from the day you broke your leg, yes or no?” Jeff’s eyes roll back into his head as he says, “How did you ever get to be such a big-shot editor with such a small memory?” “Thrift, industry and hard work,” replies the editor, “and catching the publisher with his secretary. Did I get the wrong day?” “No, wrong week! It’s next Wednesday I emerge from this plaster cocoon,” moans Jeff.

The injury, he learns, will cost him a plum assignment in Kashmir, “about to go up in smoke.” To dampen the anguish from this missed opportunity, Jeff maneuvers a long stick inside his cast to scratch an annoying itch just above his knee.