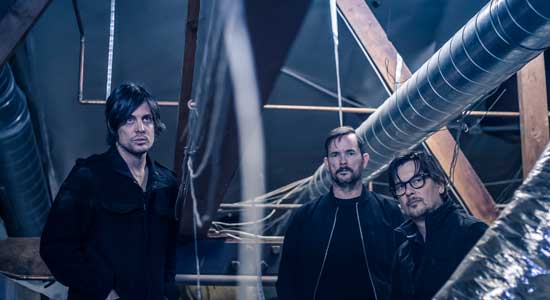 A lifetime of change can occur in a year. Multiply that calendar by 20, and the potential for course deviation rises to an almost astronomical level. Factor in the context of a band’s history and you’re looking at a possible alternate reality of epic science-fiction proportions.

Perhaps that’s why Failure’s new album, The Heart Is A Monster, is an unexpected surprise. After a two-decade absence and a parade of band/side projects, guitarist/vocalist Ken Andrews, bassist/vocalist Greg Edwards and drummer Kellii Scott reconvened to follow up 1996’s critically acclaimed and commercially ignored Fantastic Planet. Monster sounds contemporarily fresh, and yet still feels like a logical next step 19 years after its predecessor, but that doesn’t mean Monster was stitched together the same way.

“The only difference between this album and Fantastic Planet is that we’re older now and we have families and kids,” says Andrews. “The idea of doing exactly what we did on Fantastic Planet, where we rented a house and lived like a little fraternity for six months, wasn’t going to happen.”

Failure’s reunion began nearly 10 years after the band’s 1997 break-up, which was fueled by Edwards’ substance issues (although Andrews readily admits they all struggled; see sidebar). After a fairly long stretch—Andrews pursued new directions with ON, Year Of The Rabbit and a solo album, while the newly sober Edwards assembled Autolux. The pair rekindled their friendship, a process that continued when Andrews and Edwards became first-time fathers, and eventually expanded into informal jams at Andrews’ home studio.

“It was all super casual, but we came up with a couple songs that sort of sounded like Failure,” says Andrews. “The backdrop of us hanging out again was that our friends were like, ‘You guys need to get the band back together.’ But Greg was doing Autolux, and still is, and my main job is mixing records for other people, so there wasn’t this huge, ‘We’ve got to do this because we don’t have anything else going on.’ It just came down to desire. I think we both started waking up and going, ‘What do we really want to do today?’ I wanted to get back in the studio with Greg, and I think he wanted to get back in the studio with me.”

Eventually, Andrews and Edwards formalized the reunion with the stated purpose of crafting true Failure songs and creating the successor to one of the 1990s’ greatest albums. The sticking point for Andrews wasn’t necessarily in believing that Fantastic Planet was an influential and beloved work; it was whether there was demand for another Failure album in the new millennium.

“We keep hearing how Failure has become this cult favorite, but there’s no way to gauge what that means,” says Andrews. “We proved to ourselves that we could make something we think is cool and is potentially a worthy follow-up to Fantastic Planet, but is anyone out there who will listen to it or care? So, we booked the L.A. show that happened in February 2014, and it sold out right away. That’s when we knew we should make a full go of this.”
The trio flirted with dropping an EP and leaving it at that, but the response to the L.A. show was overwhelmingly and undeniably positive. The stage was set for a full-scale Failure resurgence.

“We realized there’s a whole new audience for our band,” says Andrews. “It gave us inspiration to finish a full-length.”

The Heart Is A Monster crackles with Fantastic Planet’s incendiary passion, and even mimics its physical structure; “Segue 1,” “2” and “3” on Fantastic Planet are mirrored by “Segue 4” through “9” on Monster. The blistering ring of Failure’s skewed metallic grunge remains as thrilling in the present tense as it did 20 years ago, and the trio has been energized by resurrecting the songs, sounds and processes it created almost half a lifetime ago.

“Failure’s core sound is Greg and I working together—we’ve had different drummers, but I’d say Kelli is a big part of the sound now—but without us, the Failure sound doesn’t happen,” says Andrews. “The first three albums were all pretty different. In the most functional way, we tried to emulate Fantastic Planet in terms of writing and recording songs one at a time, soup to nuts, before moving on. That was the major difference between Fantastic Planet and the albums before that. The studio becomes less about a technical exercise of recording a song you’ve already demoed and becomes a discovery thing, and it makes for an overall more creative experience.”