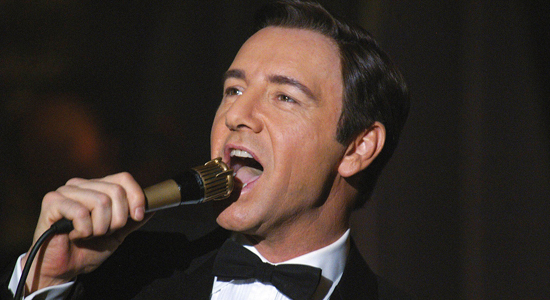 This must be a project that Kevin Spacey, one of the finest actors of his generation, has dreamed about since he first appeared in moving pictures almost 30 years ago: to direct and star in the story of ’60s pop singer Bobby Darin. Spacey, who does all his own vocals here, is the perfect fit as the enchanting-yet-abrasive entertainer who switched gears before you could count to four, from raunchy R&B belter (“Splish Splash”) to jazzy, Sinatra-like balladeer (“Beyond The Sea”). And, just as quickly, go from loveable pop star to burr under the saddle when things went wrong.

When I interviewed Roger McGuinn, lead guitarist/vocalist of majestic folk-rock combo the Byrds, for liner notes to one of his solo albums, he spoke fondly of his days before he formed the folk/rock legends, when he played lead guitar in Darin’s backup band.

The story here opens with Darin (Spacey) celebrating his 10th anniversary in show biz with a rare, intimate performance at New York’s Cocoanut Grove night club. The orchestra vamps with the opening chords of “Mack The Knife” as Darin is escorted to the stage by an entourage of about a dozen. Everything sounds right on the money when the singer abruptly pulls the ripcord on the song, three choruses in, when he spots the kid who plays the 10-year-old Bobby Cassotto (Darin’s birth name) at the back of the club.

Darin blames the interruption on the band to the grumbling fans who’ve paid big bucks for tickets. “I can do it much better,” he says to the unhappy audience as he leaves the club. One of the band members moans to Darin’s manager Steven Blauner (John Goodman) that it’s unfair to blame this on Darin’s musicians. “They’ve been working their asses off for him,” he says. A recent recruit to Darin’s backing outfit chimes in, “Yeah, I’ve never worked for such an arrogant asshole!” Blauner faces the complainer and levels him with, “Listen, you prick, there are four people around here who can’t be fired, and you’re not one of ’em! He might be an asshole, but he’s our asshole!”

Suddenly, Darin is transported to the Italian neighborhood in the Bronx where he grew up, as the family doctor explains to his mother that young Bobby has rheumatic fever. “It’s an illness that damages the heart and effects the joints and muscles too. Even with the best medical care in the world, the boy will be lucky to see his 15th birthday.” A few weeks later, young Bobby is awakened by his mother playing “Up A Lazy River” on a newly purchased piano. “It’s for you Bobby,” she says. The adult Darin muses, “Mama was right about music. It opened up a whole world to me outside of time and illness.”