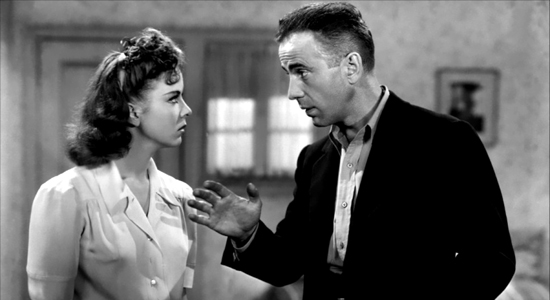 Humphrey Bogart, about to turn 42, got second billing to Ida Lupino in film noir gem High Sierra. It was the last time he’d play second banana to anyone. His breakthrough performance as ex-con Roy Earle paved the way for every Bogey classic yet to come, from The Maltese Falcon and Casablanca to The African Queen and The Caine Mutiny. Only George Clooney, in recent years, has approached such a middle-aged bonanza.

The gates to Mossmoor Prison swing open and Roy Earle walks out, a free man. A mug in a battered coupe opens the car door for the pardoned man. “I was gettin’ kinda worried, Earle. Been waitin’ for over an hour.” Earle looks around and takes a deep breath. “I been waitin’ too—over eight years!” he says. “The park’s down there, ain’t it?” “The park? Say, Earle, you feelin’ all right?” Earle gazes up toward the blue sky and says, “I will be, soon as I make sure that grass is still green and the trees are still growin.'”

Earle heads straight for Big Mac’s place to get connected for some work. “Where’s Big Mac?” he barks at a face he doesn’t know. “Gone to California. I’m running things from this end now,” says a guy in a three-piece suit. “Who are you?” demands Earle. “I’m Jake Kranmer,” the man replies. “Copper, ain’t ya?” snarls Earle. “Used to be. I resigned,” says Kranmer (Barton MacLane). “Don’t worry about me. Mac wants you to start for California right away. The car downstairs is yours.”

“What’s the set-up?” asks Earle warily. “Tropico Springs, the richest little resort town in the world, they say. The hotel there gets all the sugar, and you’re gonna knock it off,” says Kranmer. “Am I?!” demands Earle. “Listen, Earle, you’re workin’ for Mac now. He calls the tune and you dance to it.” Earle takes the car keys, an envelope of cash and a map from Kranmer, then slaps him viciously twice across the face and slowly walks from the room, never looking back.

As Earle crosses into California behind the wheel of a ’38 Plymouth Deluxe coupe he begins to overtake an ancient Model T with three occupants, traveling at a snail’s pace. The old man behind the wheel suddenly veers to the left as a jack rabbit jumps into the road. Earle manages to avoid a certain collision by driving into hardscrabble beyond the road’s edge. He pulls into Ed’s Last Chance For 50 Miles filling station, followed soon by the Model T. “Wow, we made it!” says the old man to Earle. “I’d sure like to shake your hand, sir. I kinda lost my head back there, but you saved our bacon.” Grinning broadly, Earle shakes the old-timer’s hand and says, “I saved my own bacon, too.”