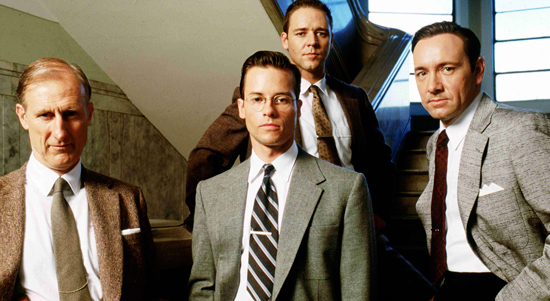 Taking a chance on unknown Australian actors Guy Pearce and Russell Crowe for the lead slots in 1997’s L.A. Confidential, director Curtis Hanson and casting director Mali Finn also dug deep for Kevin Spacey, better known at the time for his live stage work, but hitting third here in what would become a powerful lineup of big bats.

Ed Exley (Pearce), Bud White (Crowe) and Jack Vincennes (Spacey) are Los Angeles Police Department cops in the early ’50s, each with a different agenda. Exley is trying hard to show he has the right stuff, much like his dad, LAPD legend Preston Exley, who was gunned down on the job. White goes out of his way to hand out rough justice to wife-beaters, and Vincennes is the pretty-boy technical adviser to Badge Of Honor, a TV cop show similar to Dragnet. All three men work under veteran officer Captain Dudley Smith (James Cromwell), who bends the law like a five-cent licorice whip and knows where all the bodies are buried.

Much like the stock market, the underworld has periods of boom and bust, and things have been looking up lately for the tick-birds attached to the snout of the crocodile. With the recent incarceration by the feds of Southland crime kingpin Mickey Cohen for tax evasion, a vacuum has been created for many out-of-town thugs to fill. Smith takes a pro-active stance to this influx of criminal activity, using White’s muscle to discourage recent arrivals, something like a Welcome Wagon in reverse.

White reveals to Exley that he’s placed first of 23 candidates on the lieutenant’s exam and asks him which department he’d prefer to join. “I was thinking detective bureau,” says Exley. “You have the eye for human weakness but not the stomach,” says Smith, shaking his head. “You’re wrong, sir,” replies Exley. Smith reels off a few sample questions to justify Exley as a candidate for the detective bureau. “Would you be willing to plant evidence on a suspect you knew to be guilty to insure an indictment? Would you be willing to beat a confession out of a suspect you knew to be guilty? Would you be willing to shoot a hardened criminal in the back to offset his being set free by some high-priced lawyer? If not, for the love of God, don’t be a detective!” Exley replies: “Dudley, I know you mean well, but I don’t have to do it the way you did.”

Mere hours after the office Christmas Eve party has ended, it’s all hands on deck. Five corpses have been found littering the kitchen of the Nite Owl Cafe—and it’s happened with Exley as temporary watch commander. One of the bodies is that of Dick Stensland, White’s former partner, recently terminated from the force due to Exley’s testimony.