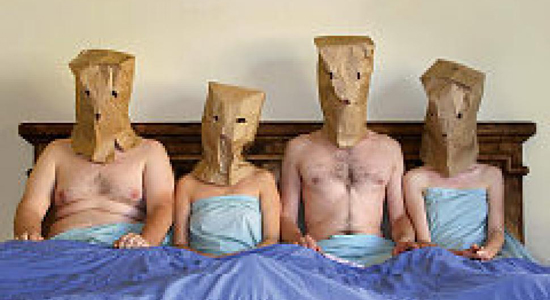 While film directors Jay and Mark Duplass were driving through the woods after a day spent shooting their previous movie, they were deploring the sad state of big-budget horror movies. They asked the cast members they were transporting, “What’s the scariest thing you could put in a movie?” Someone piped up, “A dude with a bag over his head, looking in the window.” Bingo! The sprout for the brothers’ next film poked its head through the garden soil.

Four unemployed Los Angeles actors—Matt, Chad, Michelle and Catherine—watch a dingy little movie by Jett Garner at an indie-film festival. Garner reveals in the Q&A afterward that his entire budget was less than a thousand dollars. They wander over to the festival’s after-party, but the admission price is too steep. Michelle (Greta Gerwig) doesn’t let that stop her. Bold as brass, she sashays right past the ticket-taker while pretending to be talking on her cellphone. Chad (Steve Zissis) tries the same ruse and gets nabbed by security before he can even open the door.

In a bar later that night, while the girls are in the rest room, Matt (Ross Partridge) asks Chad, “What’s the last time one of us had a major role in a feature film?” Chad answers softly, “It’s been a long time.” “Never!” bellows Matt. “We’ve never had a role in a big film!” When the girls return, Matt and Chad reveal the new plan. “We’ll spend the whole weekend together and write a feature film that will make big stars out of all of us,” says Matt. “My uncle has a cabin up in Big Bear,” adds Chad. “I think we should leave tonight.”

They arrive at the cabin, deep in the woods, in the wee hours, open the beer and wine and try to brainstorm a script. Matt says, “Before we go to sleep, we’ll get the plot down. C’mon, Chad, what happens?” Gazing at Michelle, Chad strums his guitar and says, “I want love to happen.” Slurring her words, Michelle burps and retires upstairs. Chad follows her into one of the bedrooms. Putting her hair clips into his hair, she tells him, “I think of you as my brother, like one of the family.” Later that night, she awakens from a horrible dream, runs to the toilet downstairs and vomits.

Next morning, Michelle, Catherine and Chad are sitting at the kitchen table as Michelle tells everyone about her terrifying nightmare: a man wandering in the woods with a bag over his head. “Matt and I had some great ideas late last night,” says Catherine (Elise Muller). “I don’t know about this bag thing … ” Without warning, Matt appears outside, stumbling from the morning mist toward the kitchen window with a paper sack over his head—and everyone screams bloody murder.