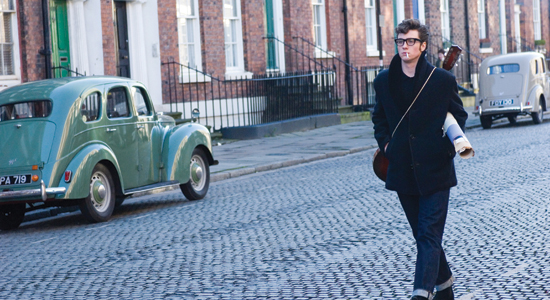 As might be expected from its aping of the Beatles’ 1966 hit “Nowhere Man,” Nowhere Boy is yet another tunnel dug deep into the ant hill of the early days of the British musical legends. It focuses on the teenage metamorphosis of John Lennon: from raging adolescence to a young man about to have the entire world served up on a plate. It’s also the most accurate movie ever made about a music-biz mega-phenomenon that may never come this way again.

By trying hard not to mimic Lennon’s thick Liverpudlian accent, Aaron Johnson turns in a blinding performance. He’s no carbon copy of Lennon, but it doesn’t matter. John Lennon was raised by his Aunt Mimi (Kristin Scott Thomas), whose no-nonsense upbringing helped the wayward teenager get his feet under him. His mother, Julia (Anne-Marie Duff), who would rather go down the pub with some young heart-throb than cook supper, contributed the artsy side to John’s genetic makeup—no mean feat.

Tragedy hits home when John and his uncle George are having a giggle at BBC’s The Goon Show on the radio just installed in John’s bedroom. “Come on, ye cheesy git. Get me in trouble with your aunty,” mumbles George as he snatches back a small flask of brandy from his nephew. George stands up, takes two steps toward the staircase and falls to the floor, dead as a hammer.

“Mimi, will he be all right?!” shouts John as she’s about to climb into the back of an ambulance. “He’s just had a bad fall,” says Mimi stoically. “He’ll be right as rain. Now, stop fussing.” Hours later, Mimi returns, faces John from across the room and says, “He’s dead.” John hugs Mimi from behind, sniffling, as she fills the kettle. “If you want to do that you go to your room,” she says. “It’s just the two of us now, so let’s get on with it, shall we?”

Lennon and his best mate, Pete Shotton, form the Quarrymen, named for their grammar school and influenced by the wildest American rockers of the day: Jerry Lee Lewis, Little Richard, Chuck Berry, Carl Perkins. Their first gig finds them playing from the back of a lorry at a Sunday afternoon church social. As the band celebrates in the parish hall with beer, a pal named Ivan introduces John to his mate Paul who plays a decent guitar. Paul rips off a letter-perfect rendition of “Twenty Flight Rock,” which earns him the chance to give John a guitar lesson. “John, your little friend is here,” says Mimi, opening the front door for Paul. The pair plays a shimmering version of “Blue Moon” before taking a break. “If we’re really gonna do this, we should write our own stuff,” says Paul McCartney to John Lennon. And so they did.