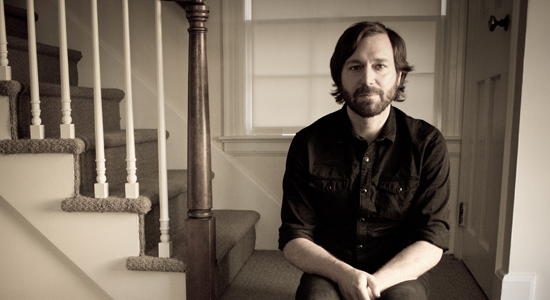 That’s Matt Pond, whose band Matt Pond PA is on a tour celebrating the 10th anniversary of its sixth album, Several Arrows Later, in advance of its ninth, The State Of Gold. Pond says the jaunt is a bit of an experiment within the uncertainties of the music business, a way of reconnecting with an audience before coming back later in the year after the new LP comes out. The tour was going well, but less than two weeks later, after a gig in Chicago, the band members would be robbed of their computers, money and passports—making things even harder and further testing Pond’s resilience.

The first MPPA album, Deer Apartments, came out in 1998, and the band has gone through many incarnations—and many cello players—since. As Pond moved from Philadelphia to Brooklyn to Bearsville, N.Y., the group’s personnel turned over several times. The core is now Pond and guitarist Chris Hansen; the cello player is Shawn Alpay.

“It’s just a fluid thing; it’s life,” says Pond. “You can all swear to some kind of oath, but people die and people get married. All sorts of crazy things happen. I just tried to find a way to accept anything that happens personnel-wise. I like playing with a lot of different people. You get a lot of different feels, and you have amazing experiences.”

The cello, although its prominence has waxed and waned over the years, has been a MPPA signature. On The State Of Gold, it weaves through “There Were Times,” but it takes a backseat to New Order-like sequencers and synthesizers on “Take Me With You.”

“I think on this new album we wanted to expand rhythmically—that was our biggest concern,” says Pond. “There’s something about putting more polyrhythms into the music that makes it more complex, but also loosens it up. There is cello on the album, but it’s not the distinctive element.”

Pond has talked in the past about the influence of the Electric Light Orchestra’s early records on his predilection for cellos, but the source runs even deeper into his childhood growing up in New Hampshire.

“I don’t think I’ve ever talked about this,” says Pond. “My dad really liked classical music. He tried to play cello, and he was terrible at it. I wanted to impress my dad, but he was unimpressable. Adding a cello into our band didn’t impress him. Don’t we live in our parents’ shadows? My father was a really difficult person, too. He was a humanitarian and a minister, but while he did great things, he did terrible things, too. ‘Oedipal’ isn’t the thing, though. There’s got be a thing where your father is probably one of the greatest people you’ve ever known, but probably one of the worst, too. And then there’s ELO.”

There may be more New Order than ELO to The State Of Gold’s blend of guitars, cello and synthesizers, but it’s of a piece with Pond’s previous work in its tension between plaintive longing and earnest affirmations. Paradoxically, it’s a confident album about having doubts; it looks outward as well as inward. “As long as we know, we don’t know anything,” Pond sings at the climax of “The Starting Line.” “I’ve been a friend of doubt/I don’t know doubt anymore,” he sings in the chorus of “No More No.”

“I don’t know anyone who is certain of anything or who doesn’t doubt themselves and vacillate,” says Pond. “For me, it’s a visible, palpable rhythm between everything. Buying a coffee, walking around, everything. I can’t play disaffected; I can’t play confident, completely; but I love what I do, and I love doing it.”

And that love is what keeps Pond fighting through the vicissitudes of the music business, of constant changes in personnel, of the writer’s block that he faced leading up to this album—of robberies, even. And he loves writing songs; that’s one thing Pond does know.

“Playing onstage, sex—those are all great,” he says. “But when you understand what you are actually trying to say in a song, that’s the best feeling. At least I have a purpose for that second.”