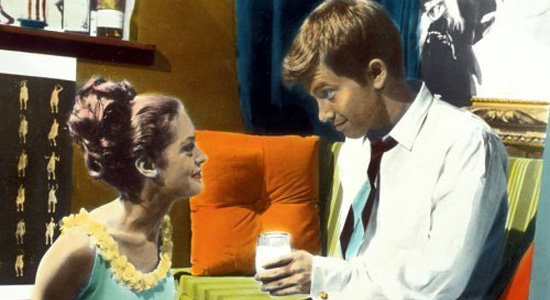 Sporting an electric cast that includes Karen Black, Rip Torn, Geraldine Page, Julie Harris and Elizabeth Hartman—as well as an outstanding soundtrack by the Lovin’ Spoonful—it’s no wonder You’re A Big Boy Now was the first Francis Ford Coppola film to receive widespread distribution. Big Boy was also submitted as Coppola’s graduate thesis to the UCLA film school, where he once discussed career moves with fellow enrollee Jim Morrison. Coppola’s early gem can now be slotted between earlier British coming-of-age comedies (Billy Liar) and the more adult situations Dustin Hoffman would encounter in 1967’s The Graduate. In the ’70s, of course, Coppola would turn the film world upside down with The Godfather and Apocalypse Now.

A relative unknown, Peter Kastner, a wide-eyed, gap-toothed look-alike for pro golfer Tom Watson, is cast as Ben Chanticleer, a 19-year old virgin sent off to college in Manhattan by a fibrillating mother (Page) and a bully of a father (Torn). Bernard is pretty sure he really likes girls. He just doesn’t know what to do when Amy (Black), the loveliest of his father’s employees at the New York Public Library, falls for him like a ton of pretzels (her favorite snack food).

So, of course, he brushes off Amy and gets all worked-up over the wrong girl, Barbara Darling (Hartman), a hard-boiled, part-time actress/go-go dancer. Barbara wears Bernard around her wrist like a pet chameleon she won at the county fair. She convinces him to bring along his lovable, king-sized sheepdog and move in with her for a couple of nights. Since the facts of life discussion has apparently been overlooked by his parents, Bernard hasn’t a clue what this cohabitation business is all about.

Miss Thing (Harris), the busybody landlady where Bernard has rented an eighth-floor walk-up, has to dance adroitly around an angry chicken who’s been left the entire fifth floor in the will of the building’s former owner, her late brother. “He barely tolerates me,” says Miss Thing as the chicken scratches at her shoes. “But it’s the nylons of the beautiful young girls he really goes after.” That notion brings a broad smile to Bernard’s over-protective mother.

The next night, Bernard and Amy, one of those “bad” girls Miss Thing is on the warpath for, wander around the Great White Way, window-shopping. They enter adjoining phone booths to talk about their elementary school days. “Do you remember me from PS 109?” she asks. “No, I only remember the pretzels. They were five cents back then. Now they’re 15 cents.” Later, Amy says, “See you,” and hops on the 5 bus to 25th St. Bernard walks back to her seat window and says, “Amy I do remember you. I came into your class wearing my suit of Reynolds Wrap armor, one day. You were so ugly! Then.”