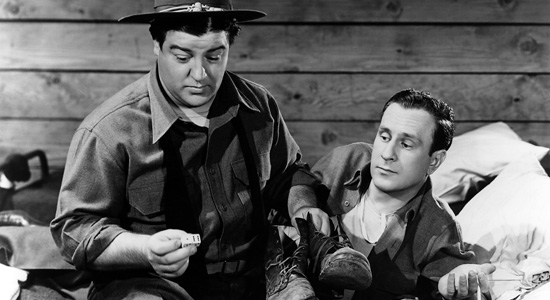 From 1940-52, the comedy pair of Abbott and Costello were as big as it got on every media outlet of the day: stage, screen, radio and the early days of television. The duo had gone from vaudeville stars in the late ’30s to major players on the silver screen who made 36 feature comedies before the magic began to fade.

The pair was a complete role reversal from the legendary comic duo of Laurel and Hardy. With a pencil-thin mustache, Bud Abbott was the wiry wise-acre, and the chubby Lou Costello, the almost child-like fall-guy. The DVD of Buck Privates, their second film, also contains a fascinating documentary on the pair, narrated by Jerry Seinfeld. A huge fan, he notes that the duo split their earnings 60-40 in favor of Abbott. You could always find a comic, they reasoned, but a good straight man would make or break the team. The doc also presents the duo’s best known comedy routine, a baseball quagmire called “Who’s on first?”

True to the format of blockbuster comedies of the day, the film includes large scale musical numbers. The Andrews Sisters warble the upbeat “Boogie Woogie Bugle Boy” (more recently covered by Bette Midler), “You’re A Lucky Fellow, Mr. Smith,” and a heart-breaking World War II ballad, “I’ll Be With You In Apple Blossom Time.” My wife’s auntie told her on many occasions how that song always reduced her to tears during the war while her husband served in the U.S. Navy on the bomb-disposal squad.

Buck Privates takes place in 1940, still peace-time for the U.S. But with Adolf Hitler on the march in Europe, President Franklin Roosevelt has just signed a conscription act to beef up America’s armed forces by inducting many of its eligible draft-age men. Abbott and Costello—as Smitty and Herbie—are caught in the wrong place at the wrong time. The boys are illegally peddling neckties outside the New York City draft board, and after being chased by the cops, they wind up in a line of men who’ve received their conscription notices.

As the recruits in front of our heroes are weighed by the draft board doctor, it’s apparent anyone 240 pounds and over is rejected for duty. If such a policy existed today, one should note, the U.S. might be unable to field an army of any size. Herbie sits on an unplugged wall heater, waiting to be weighed. Unknown to him, Smitty has plugged in the unit to sweat off a few pounds from his pal. “Have a good time in the army,” says Herbie to Smitty, patting his rotund gut and murmuring the magic number, “241.” The doctor beams as he announces to Herbie once he’s stepped off the scale, “Congratulations, my boy. You’re in the army by two ounces!”