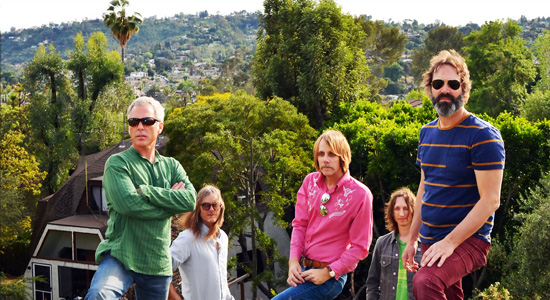 After Beachwood Sparks’ fade-out, GospelbeacH lets the sunshine in

Brent Rademaker would like to think that GospelbeacH’s Pacific Surf Line (Alive Naturalsound) is a celebration of our country’s two left coasts—though maybe he would’ve preferred a bit more Old Florida charm to counter the L.A. swagger. “I miss the beach there; I miss the feeling in the air after it rains,” says Rademaker, a native of the Gulf Coast. “I really wanted to make this album sound like the kinds of music I listened to growing up in the ’70s.”

By and large, though, Pacific Surf Line celebrates Rademaker’s return to Southern California, its title referencing the modern trains that now traverse its dramatic coastline. “I love the people out here,” says Rademaker. “I work at Commune Design, which is known for being quintessentially California. I work with my wife and a ton of creative people. Once I started working there, that’s when the record really started taking shape.”

For a collective effort, Pacific Surf Line is surprisingly lean, with more refined nods to the Flying Burrito Brothers twang that informed Rademaker’s former group, Beachwood Sparks. GospelbeacH isn’t afraid to broach the breezy accessibility of yacht-rock mainstays like the Eagles and Loggins & Messina, either. “If I’d had my way, it would’ve all sounded like Pablo Cruise,” says Rademaker, only half kidding. “The whole idea was easy listening. My dad and my neighbor—who both like country music and rock ’n’ roll from the ’50s and ’60s—love it.”

After the protracted 2012 demise of Beachwood Sparks, the critically adored alt-country band he cofounded in 1997, Rademaker retreated to Tampa, where he worked in an art gallery and tried to shake o his unhealthy musician’s vices and a myopic, road-weary perspective on life in general. “I’d just had enough of it; I was in a rut,” he says. “I felt like I had to move back to Florida.”

He eventually reconnected with original Beachwood Sparks drummer Tom Sanford, and the two began kicking around ideas in Rademaker’s home studio, a.k.a. the Crabshack. “It began with just two guys fuckin’ around,” says Rademaker. “Now we’re like partners in crime.”

In a matter of months, the two were back in L.A., where they began recording some new originals. They called on fellow Beachwood alum Neal Casal to play guitar and sing. Casal’s credits also include stints with Ryan Adams & The Cardinals, Black Crowes frontman Chris Robinson’s outfit, and Grateful Dead kingpins Phil Lesh and Bob Weir’s Furthur.

Soon enough, the trio added Jason Soda (Everest, Watson Twins) and Kip Boardman (Watson Twins). “This whole thing was very organic; I can’t even fucking remember how it all happened,” says Rademaker. “It’s more than what we bargained for—or even expected. I’m really lucky that GospelbeacH isn’t a step down.”