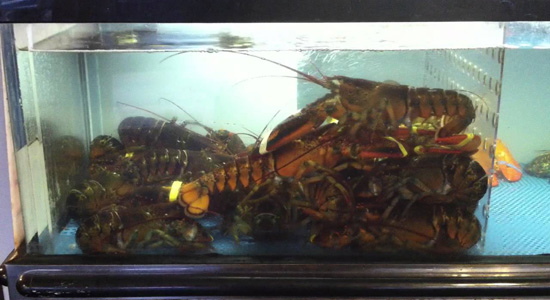 So A Perfect Circle was made up of a bunch of dudes from successful ’90s bands who needed a new regular touring gig, you know … supergroup. Usually supergroups are pretty lame and tired because it’s just a bunch of jaded dudes with nothing to prove cuz they’re already rich just grabbing the cash and running. And as much as I like all the dudes in the band, A Perfect Circle was just that … a bloody cash grab. I mean their records are weak to embarrassing—embarrassing being the one where they cover John Lennon’s “Imagine” (which, like 99{e5d2c082e45b5ce38ac2ea5f0bdedb3901cc97dfa4ea5e625fd79a7c2dc9f191} of their musical output, is just unnessasary). The band was made up of drummer Josh Freese (from the Vandals, Devo and later Weezer, Nine Inch Nails and every other band), Jeordie White, a.k.a. Twiggy Rameriez (he was the dude in the dress on bass in Marilyn Manson and he wrote “Beautiful People”), James Iha (the Asian dude from the Smashing Pumpkins that everyone just assumed was an ugly chick on guitar through out the ’90s), Billy Howerdel (who started the band with Maynard and up until this point was a guitar tech for Tool) and The Nard himself. Fuckin’ star power right? Yeah, none of us were fans of A Perfect Circle, but I think it’s safe to say that we liked all the members of the band and got along with them.

Not only did the band have a tour bus, but Maynard had his very own tour bus that he’d just purchased. Yeah, he owns his tour bus, no big deal. The thing was some brand new multi-million dollar deal, a fuckin hotel on wheels. And then here we are trying to keep up in a fucking van and sharing hotel rooms every other night. So yeah, A Perfect Circle played their watered down Tool songs and a Failure cover during which they would usually invite Captain from the Icarus Line to come out and play drums with them, it was a really nice offering. And I have to say, everyone from the band was super nice to us on the tour. It was more the production and management that did gel with our vibe.

Now I gotta explain Todd Fox. See Todd Fox is this ex-military dude/martial-arts master/psychopath that Maynard employs for security. So the first night of the tour, Todd rounds us all up and takes us into a backroom where he busts out a VHS tape (I remember being surprised to see a VHS even back in 2003, too) and popped it in this TV/VHS player and makes us all watch a five-minute highlight tape of him breaking people’s arms, kicking people in the face, repeatedly punching people … basically just seriously fucking people up while he just stood there silent with his arms crossed until the video was completed. Then he said, “Look I don’t wanna have to do any of this to any of you, don’t fuck up and step out of line and we’ll all be fine.” It was seriously the weirdest threat or warning I’ve ever been issued. Todd Fox is a freak. Todd would sweep the crowd for any and all video cameras while APC played, confiscating any he saw. Maynard wasn’t into video taping, and Todd Fox was his muscle for making sure no one filmed shit. I was allowed to shoot the Icarus Line’s set but never Perfect Circle (except a couple times on the song Captain would play with them, although even just doing that I found myself in an accidental Todd Fox headlock). Todd’s other job we would find out later in the week was handing out aftershow passes for the Lobster Tank. More on that in a bit.

At the end of their set, Maynard, who was already in the back by the drummer with no spotlight on him cuz he doesn’t wanna be famous or something, would leave the stage, the house lights would come on and the remainder of the band would do cover songs by Oasis, Metallica and others. It was actually the best part of the set because everyone onstage was into it (the APC always felt super professional like they had to clock in and clock out, just getting paid) and they seem a lot looser once The Nard was back in his private backstage quarters and they were left to ask the crowd what cover songs they’d wanna hear. It was half cover band, half comedy show, and honestly who doesn’t like that?

They even started inviting us out to sing covers with em, Aaron sang “Master Of Puppets,” Joe creeped the place out with “I Wanna Be Your Dog” and I sang “Cigarettes And Alcohol” with Twiggy. I gotta say there is a pretty amazing thrill from singing “You might as well do the white line” to 7,000 knuckleheads. Basically what I’m trying to say is I know what it’s like to be in Oasis. And it fuckin’ rules, I can see how that sort of thing could be addictive.

Not only were we not used to playing to crowds this size, but the people in attendance couldn’t have been anymore alien to the people who would normally come see the Icarus Line on tour. First of all, no one we knew or that was already a fan of the band was coming to these shows because the tickets were like $40 or something. We’re talking the crowd was 100{e5d2c082e45b5ce38ac2ea5f0bdedb3901cc97dfa4ea5e625fd79a7c2dc9f191} Maynard fans and 0{e5d2c082e45b5ce38ac2ea5f0bdedb3901cc97dfa4ea5e625fd79a7c2dc9f191} fans of the Icarus Line. But yeah, no one was coming to see them because $40 tickets just didn’t fly in our world. I ain’t paying $40 for anyone except like maybe Neil Young (if I can party with him after the show) or I guess Bob Dylan (if I don’t have to meet him and they make him play guitar instead of that annoying organ he’s all into lately). And secondly we were used to touring on a much smaller scale, in every sense of the word. But I remember being into it, it was new and it was exciting. I figured it was good to not be preaching to the converted and any fans we got from this would be great, plus there were tons of chicks at the shows. And from watching Todd Fox hand out after-show passes, I soon figured out the quickest way to hang out with chicks on an arena-rock tour… after show passes and the Lobster Tank.

Aside from drinking any and all beer backstage, after the shows I liked to slip into the crowds with my video camera and get my National Geographic on. This tour proved to be a lot like a visit to the zoo, sometimes I just had to get out there and observse these animals in their natural habitat. Plus with a pocket full of aftershow passes, it only took a few, “Hey wanna hang out with the bands after the show? We’re having a party,” to fill our backstage room up with girls. That’s when I walked by the room marked “Hospitality” that was now pack full of eager girls wearing after-show passes, sitting in a circle of folding chairs and listening to Led Zeppelin on a shitty iPod boombox. Ohhh, it all made sense, hospitality is actually HOSpitality. Jeordie would later explain to me that was the Lobster Tank, where they “would go to pluck nightly lobsters.” Lemme explain, before and during the show “head of security” Todd Fox would hand out after-show passes to all the chicks in the crowd he thought were hot as well as anyone Jeordie pointed out from stage while playing open-E for half the song on bass one handed (it was actually kind of a beatuifully gross thing to watch). The whole process blew my mind wide open. I had no idea this sort of thing went on. I mean, sure I’d gotten laid on tour, before but this was some next-level shit. These guys had it dialed. This was above and beyond, this was some calucated sexual delivery service. These dudes were sick, and it was kinda awesome. I was impressed and grossed out at the same time.

Walking through the crowd after the show the first night, Captain and I were reccognized by a pack of girls as “those long hair guys who bummed everyone out before Maynard came out and walked on water.” They invited us to a good old-fashion San Antonio, Texas, houseparty. Being that I had never been to one of those and it was Halloween. I mean, how could we not go? Well at least half of us ended up going, the other half went back to whatever $45 hotel room we’d gotten so that they could smoke weed. When we arrived at the house, the whole block was lined with cars, the door to the house was wide open and an empty keg sat next to the curb. It was a lot bigger than I expected and I couldn’t help but scope out the line from the roof to the pool in case I needed to bust out the “I Am A Golden God” bit and swan dive into the pool later to save the party.