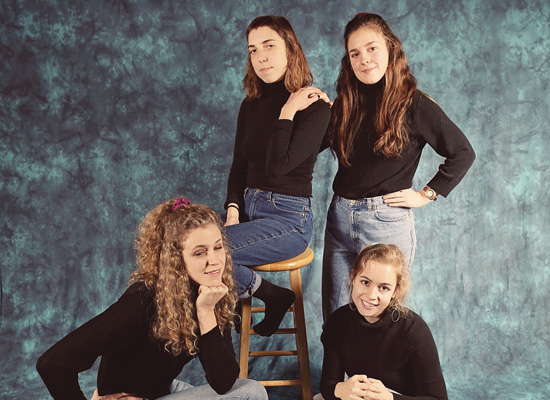 Chastity Belt trades comedy for consciousness on its latest LP

The peals of childish laughter and occasional piercing screams can only mean that Chastity Belt frontwoman Julia Shapiro’s band has just completed its day counselor duties at the Rain City Rock Camp for Girls. “There are a lot of bands here in Seattle that volunteer for this,” she says. “Today we were playing for the campers—mostly girls from age eight to 15, although honestly, I didn’t see any 15-year-olds. It was very young; lots of little girls who had just learned an instrument at the beginning of the week and are playing at the Crocodile Café tomorrow night, in front of like 500 people. That’s insane!”

She laughs at the thought of the pressure involved in preparing so quickly for a public debut. “I’d be so nervous,” she says. “And it was funny—at the beginning of our set, everybody was just sitting down on the (middle school gym) floor, eating their lunch while we were playing. At like a third of the volume we normally play at. Which was pretty uncomfortable, but in a cool way.”

Being “uncomfortably cool” actually suits this Seattle-based quartet just fine, thank you. The band began as something of a joke when all four women—guitarist/singer Shapiro, guitarist Lydia Lund, bassist Annie Truscott and drummer Gretchen Grimm—were still undergrads at Walla Walla, Wash.’s Whitman College, a small liberal arts school on the eastern side of the state.

“We had the band name before we even had the band, or any songs,” says Shapiro. “I would get drunk at parties and try to convince people to join Chastity Belt. We’d watch a house show go down, wait for the band to be done playing, then take over the stage. We wrote our first song for this frat battle of the bands. It was called ‘Surrender,’ and we’d chant, ‘Put your chastity belt on and surrender to the god of punk!’ All this stuff about wearing eyeliner, dyeing your hair, stealing cigarettes from your mom. It was a total joke, but deep down we all really wanted to be in a band.”

After the band relocated to Seattle postgraduation, its first album, 2013’s No Regerts, continued in the in-it-for-yuks vein, with songs such as “Pussy Weed Beer,” “Giant Vagina” and “Nip Slip” inserting a healthy dose of self-deprecating humor into the group’s unschooled, spindly guitar rock.

But then a funny thing happened on the way to the punchline: Shapiro found something more than merely “funny” to say, and began writing more sophisticated songs that demanded a closer degree of attention. Which, in turn, pushed the band’s latest LP, Time To Go Home (Hardly Art), toward altogether more fertile creative turf. Mixing feminist messages of empowerment (“Cool Slut” pays tribute to “all the girls in the world tryin’ to take off their shirts”) with stone-faced frustration at the tidal wave of mansplaining happening around them (as on the hypnotic “Drone”: “He was just another man, tryin’ to teach me something”), Shapiro moved from easy laughs to songs that spoke to the adult search for identity.

Exhibit A: the album’s title track, which starts off just wanting to have a drunken night out, but concludes that “everything is beautiful, because we’re delusional/I think I figured it out.” The simple fact that it’s all pretty far from figured out showcases a group growing up before our eyes and ears, one that could sonically pass for the evocative layers of the Dream Syndicate or Nico-era Velvets as easily as any number of riot grrrl predecessors.

Being in an all-girl band can be something of a tricky topic these days, but one that Chastity Belt has nonetheless found a way to handle with its typically goofy good grace. “Growing up, I didn’t even listen to that many bands with women—in high school, Fiona Apple might have been one of the only female musicians I knew about,” says Shapiro. “So, yeah, gender is definitely a thing in music—or in anything. And some people get really excited about it. But it’s not negative. In Seattle, being in an all-girl band just isn’t that rare anymore. It’s been done before. It’s not like we’re trying to be accessible only to hardcore feminists or anything like that. We’re just women who are feminists, because we’re women.”

Shapiro laughs at herself, listening to the flat, irrefutable logic of her last sentence: “We didn’t say, ‘Let’s sit down and write a song about feminism.’ It’s just what we have to say. Because that’s our life experience.”