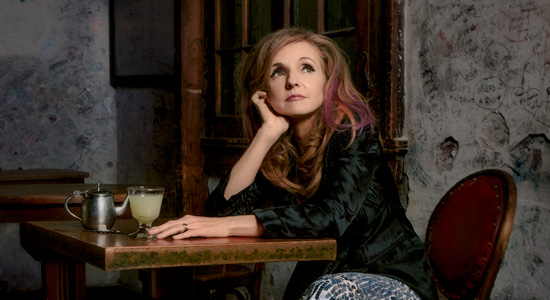 Patty Griffin offers subtle music for the heart and soul

Servant Of Love, Patty Griffin’s latest album, is one of her most sonically impressive, albeit in a quiet way. With the help of co-producer Craig Ross, she’s fashioned soundscapes that manage to be both intimate and expansive, balancing quiet acoustic instruments with the cosmic waves of color produced by the sustained notes of an Omnichord. The lyrics remain as insightful as we’ve come to expect from Griffin, but the diverse arrangements include the indigo shadings of a late-night jazz club, swampy blues excursions and energetic rockers that suggest Keith Richards backing Howlin’ Wolf.

“My last album (2013’s American Kid) was an exercise for me,” says the Nashville-based Griffin. “I was doing a three-chord classic country songwriting thing. I’d met some great folks in Nashville, who are really good at that. I wanted to see if I could do what they do. In 2010, Universal put out Silver Bell, an album I made 13 years ago, that was never released. It was remastered and remixed by Glyn Johns (an engineer who’s worked with Dylan, Jimi Hendrix and the Beatles). There were some concentrated phone calls about the mix, and while it’s not a great record, I began to admire the di erent things I was going for. I was listening to a lot of jazz and other things then, and I was reminded of how open I was to different styles of music. I tried to get back to that place.”

The songs are all love songs, but they investigate everything from extremes of emotion so violent that they hint at murder, to the ordinary joys and sorrows of birth, death and the pains of uncertain affection—all delivered with Griffin’s subtle intensity.

“I didn’t start out to write an album about love; the theme just evolved as the songs came to me,” she says. “I really don’t know what I’m doing when I sit down to write. The songs just show up. I never feel like I have any discipline, although I do get the work done, usually after nine at night. Music just feels better and sounds better to me at night. Maybe because there’s less noise, I can hear it better. Sometimes, I hear it in my head. Sometimes I sit at the piano or pick up the guitar, and it starts showing up. I’m not very conscious about what I’m writing when I’m writing, but then, as I look at it when I’m finished, I realized I’m connected to it. I think everything I’ve ever done is slightly autobiographical, even the story songs. There’s always some of me in there.”

The album was recorded in two weeks, with a weekend break between sessions. “The basics tracks were cut live, me singing and playing guitar or piano, or singing with (guitarist) Scrappy Jud Newcomb, who is an amazing musician. Then Craig took the tracks to his tiny home studio for overdubbing. It’s a small room, and if I’m there, I’d be breathing down his neck, so I stayed away.”

Ross has been producing Griffin’s albums for 20 years, so she trusted him to add the finishing touches on his own. “We talked over these songs as I was writing them, so, by the time we recorded, we had a pretty good road map laid out,” she says. “I mentioned three records I admire for reference points: Morphine’s Cure For Pain, Nina (Simone) Sings The Blues and Leonard Cohen’s Songs From A Room. They’re all small records, but they sound huge and get the point across.

“We called Shawn Colvin in to do some backing harmonies. She’s unbelievable at accompanying another voice and makes really unique choices for the harmonies she adds. My timing is pretty wacky for a singer, so I stumped her few times, but after she listened closely, she came back in and did it.”

The album also includes the trumpet work of Ephraim Owens, a player with a unique style that’s part jazz and part country, with a phrasing that complements Griffin’s slightly o beat vocals.

“Adding the trumpet was a last-minute idea,” says Griffin. “I’ve seen Ephraim play in a lot of different situations around Austin. Musically, he really comes from a whole different place, so we invited him in to see what he could do on a couple of tracks. He really brought something magical to ‘Noble Ground’ and ‘Snake Charmer.’”