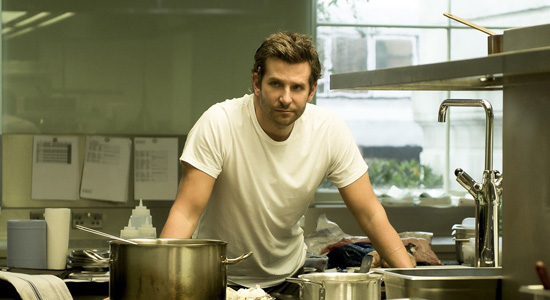 One can only guess this “comedy” was meant to be aimed at the “foodie” audience. When a new film stars Bradley Cooper, pretty much the leading man of his semi-generation, and the movie turns out to be a real stinkeroo, it’s imperative to get the word out before too many of the unwary wander into the clutches of Burnt. Directed by John Wells with wooden dialog by Steven Knight, this one smells of leftover lasagna after the power’s been cut off to the fridge for a week. If you didn’t score a free pass, guess what: You’ve been “burnt.”

Cooper, whose career has been nothing but net recently (American Sniper, Silver Linings Playbook, American Hustle) completely swallows the peach pit on this one as Adam Jones, a hotshot American chef who spends all of his time being his own worst enemy. Due to an out-of-control drug habit, he’s already blown his gig at a cutting-edge restaurant in Paris. And now he’s talked his way into running the kitchen of an upscale new eatery in London, owned by Tony (Daniel Bruhl, much wimpier here than his portrayal of Formula One race driver Niki Lauda in 2013’s Rush).

Jones excels at creating those tortured little nouvelle cuisine meals that resemble a photo from Creative Gardening magazine that should be presented on tea saucers rather than dinner plates. And he spends most of his time in the kitchen screaming at his line staff and throwing crockery against the wall. This boorish behavior is meant to suggest the chef is unhappy with whatever it is they’re doing (or not doing) that stands between him and that coveted third star from the esteemed Michelin restaurant guide.

Despite Jones’ non-stop boorish behavior, one of the lead girls from his staff, Helene (Sienna Miller, who played the wife of Cooper’s lead character, Chris Kyle, in American Sniper) still loves the guy. You might be able to believe she could fall for this big bully, but in the end, Cooper’s overwrought, cardboard cook lies on the kitchen floor like a filet mignon that’s been run over by a delivery truck.