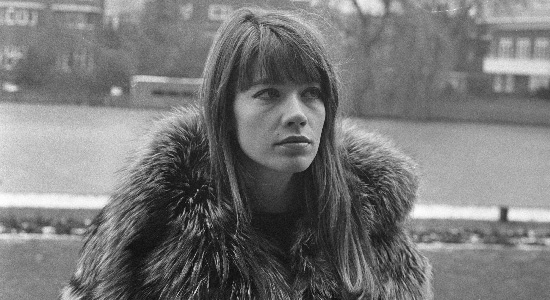 By the mid-’60s, Françoise Hardy was a star, although a reluctant one. The shy singer and songwriter had a huge hit in France with “Tous Le Garçons Et Les Filles” from her first EP, released in 1962 when she was 18. That song—still her best known, but by no means her best—launched a career that continued through at least 2012, when her 27th album arrived.

By 1966, when the last of these five reissued albums came out, Hardy was 22 and a fashion icon, a movie actress (in Woody Allen’s What’s New, Pussycat?) and a pop star. Bob Dylan, Mick Jagger, Paul McCartney and George Harrison were all infatuated with her (Dylan especially: He wrote a poem for her, refused to continue a concert until she agreed to meet him, and tried to seduce her by singing “I Want You” and “Just Like A Woman” to her in private). Although the musicians aren’t credited, it’s likely that guitarist Jimmy Page did session work for the last two of these records. (Want more name-dropping? Google her later encounters with Nick Drake, Blur and Malcolm McLaren.)

Light In The Attic has released Hardy’s first five French-language albums on CD and vinyl, and they are full of seductive melancholy, perky pop and period pieces. Hardy occupied an odd space when she debuted more than half a century ago: She was steeped in the tradition of Chanson Française, the literate crooning style of mid-century France. But she was also enamored of the British and American rock and pop she heard via Radio Luxembourg, and she was, at first, a willing puppet of her record label. Her early work gets described as ye-ye (bowdlerized for the U.S. release of the fi rst album, which called her the “‘Yeh-Yeh Girl’ From Paris!”), but she’s not like the lightweight, gogo girl pop that characterized the style. She wrote songs—an oddity for early-’60s pop artists—and played acoustic guitar, and her image suggested a seriousness of purpose and a cool remoteness from the start.

The provenance of these records is convoluted, too. When they came out in France, each annual 12-track release was culled mainly from the EPs Hardy released between 1962 and 1966; none was conceived as a singular album. (Completists would wish Light In The Attic had included the other tracks from the contemporaneous EPs as bonus material for these 30-minute records.) All but the last one was titled simply Françoise Hardy. The fifth album, 1966’s La Maison Où J’Ai Grandi, was actually Hardy’s sixth in France: her fifth was a set of songs sung in English.

Although these five records trace Hardy’s history, it’s hard to pick favorites—they each can jump from jaunty, harpsichord-based pop to orchestral ballads to fuzztone guitar rock (to take the first three tracks of 1965’s L’Amitié as an example). Fans of early Marianne Faithfull, Stereolab at its poppiest and Keren Ann at her sultriest will fi nd plenty of pleasure here. Me, I’m thrilled with these, but also hoping the series continues with Hardy’s next fi ve albums. That’s when she hit her stride as a singer/songwriter and the albums became more focused and coherent and moody.