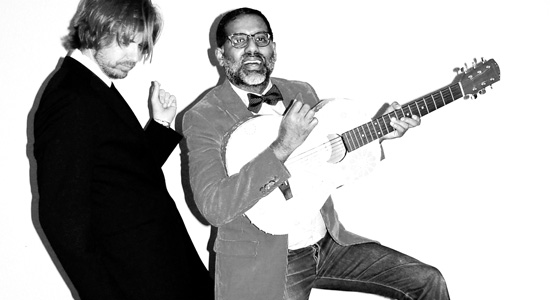 David Dewese and Jerry James, the friends that make records as the Foxymorons, met at church camp when they were in high school. They discovered they had an affinity for noisy, primitive rock bands. Since they both played rudimentary guitar, they thought about starting a band.

“In our late teenage years, we pretended we were in a band called the Foxymorons,” says James.

“We didn’t play music or write songs,” says Dewese. “I remember braggadociously telling waitresses we were in a band called the Foxymorons. It was a great name for a fake teen punk band 20 years ago.”

They pressed up a seven-inch single and mailed it to radio stations, fanzines and distributors. A copy found its way to Mel Cheplowitz at American Pop Project Records, who asked the Foxymorons if they’d like to put out an album. They said yes.

Although they’d never played live, their debut album, Calcutta, got stellar reviews. As soon as it was out, Dewese moved to Nashville to play in an alt-country band. James stayed in Texas. They’ve maintained a long-distance collaboration ever since, and just finished work on Fake Yoga, a return to the primal sound of their debut.

“We’ve been a bit precious and ornate with the musical arrangements on our last few albums,” says Dewese. “We really wanted to strip away all those layers and get back to the raw elements of being in a rock band. We purposely recorded with a limited palette of options. We wrote separately, as usual, later realizing we’d both consistently left out bridges, extra verses and even some choruses.”

While Fake Yoga has elements drawn from country and pop music, including the duo’s sweet, Beach Boys-flavored harmonies, the album is dominated by their distorted, almost metallic guitar work.

“This album reminds me of the music we played when we started out: noisy and primitive, but still melodic,” says James. “Fake Yoga is a brattier record than our last couple of releases. Maybe it’s because we’re turning 40? I’ve always been drawn to no wave-inspired guitar rock, the artier side of punk. Or it might have something to do with the fact that I see a lot of guys my age playing in Texas country bands. I mean, nothing against that, but I’m not ready to do that yet.”

Dewese and James work separately, but by the time they’ve recorded a song, the interplay between them has always transformed the tunes into something unexpected. There are no album credits or liner notes, except those crediting their drummer, Will Johnson from Centro-matic.

“There can be something inherently narcissistic and counter-productive about getting too concerned about credit,” says James.

“It’s not important for us to notate who performs what, since we constantly exchange instruments and vocals,” says Dewese. “We sing and perform everything, and happily credit friends like Will, when they help out. As a long-distance duo, we record most of our records one instrument at a time. We built (the songs on Fake Yoga) over a corny drum loop, one guitar or vocal at a time. We had Will record his drums last, so he was playing along to our completed songs with that corny drum loop running in the background. What a dude!”

James says the method they’ve developed over the years suits their idiosyncratic writing and production style. “The process is very organic,” he emphasizes. “Sometimes I listen back to our records and think, ‘How did it end up like this?’ One of the exciting things about making records is the heady process of sharing ideas and letting things happen. We’ll blatantly rip of some small thing—like a guitar part, a vocal inflection, a harmony—from our record collections, be it the Byrds, Big Star or Half Japanese, and it becomes its own thing and takes us down a new path.”