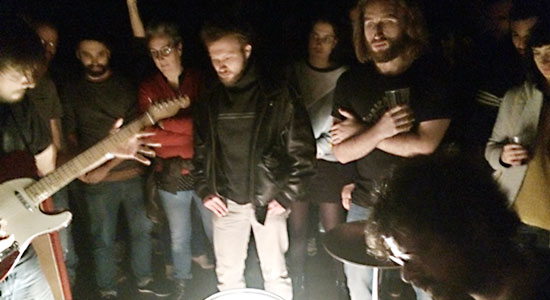 The greatest fear at a rock show used to be a wayward elbow in the mosh pit or, at worst, a group of skinheads itching for a fight. Now, you have to worry about goddamn terrorists with Kalashnikovs and suicide vests.

Just two harrowing weeks ago, a coordinated team of dickless bullies murdered 130 people here in Paris, including nearly 90 concert goers at the Bataclan club. How should civilized people react to such barbarism?

Antonin Artaud wrote that no one has ever painted, sculpted or invented for any objective other than to forge a path out of hell. So perhaps we should fight fire not with fire, but with art.

Tonight, in this reeling city, Pneu takes its cue from Artaud and responds to the spray of bullets with a spray of notes. This inventive spazzcore duo from Tours, France—one-fourth of the rock collective La Colonie de Vacances—conjures sonic razor blades flying about in a blender, but choreographed down the most minute slice.

Pneu is math rock that doesn’t bother to carry the one. The all-instrumental, guitar/drums combo starts and stops on a centime, but—while the music is tightly controlled and precise—the primary goal is the euphoria of unbridled expression. Speed metal, noise, hardcore and occasionally stoner sludge converge in a chaotic thrill ride. Wisely, the fracas never descends into cacophonous skronk.

Yes, “Grill Your Eyes” is attention deficit disorder plugged into a Marshall stack, an indiscriminant spunk splatter of cymbal crashes, snare snaps and hardcore riffing. But the deliberate “Gin Tonique Abordable,” which owes much to the middle break in Nirvana’s “Drain You,” builds with the patience of a slowly boiling kettle. Eventually, it delivers a satisfying payoff that depletes the listener as much as it does the musicians.

In fact, Pneu sets up its gear in a way to maximize this communion with its audience. Inspired by kindred spirit Lightning Bolt, the duo places its equipment in the center of the dance floor, wordlessly inviting the audience to form a huddle. The intent is clear: the pair removes the barrier separating performers from spectators, to ride the rollercoaster side-by-side, to share in the rush.

Fans are packed in so close they can smell the musicians’ sweat and ache with their fatigue. The venue is pitch-black, save for an upward-pointing spotlight beneath the drum kit. The vibe is that of a group of friends snuggling around a campfire, telling horror stories.

But Paris has had its fill of horror recently. Tonight, the miracle of artistic creation delivered us from evil.