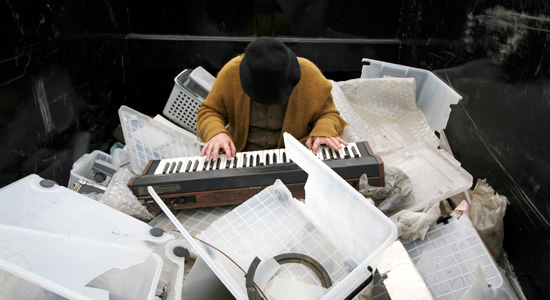 In a recent interview with BOMB magazine, Jim O’Rourke recalled having to justify to his father his habit of rewatching movies. “People put years of their lives into this; there’s so much in there,” he said. “How do you think you can understand years of someone’s life in two hours?” Simple Songs, his first album of songs in 14 years, clocks in at just 38 minutes, but it’s so densely packed with gradually revealed details that it needs to be taken in the same way: repeatedly, while paying close attention. Its eight far-from-simple songs are populated with grumpy ghosts, forgotten artists and vanished places, each in a different state of awareness of its ongoing disappearance. O’Rourke has jettisoned the broad humor and overt references of his earlier records for Drag City, and instead crafted icy meta-pop slick enough to give the characters nothing to hang onto as they recede into oblivion. But each time you watch them slide away, you’ll notice some new lick or line that draws you in, keeping you engaged with figures that are on their way out. Now that’s staying power. —Bill Meyer