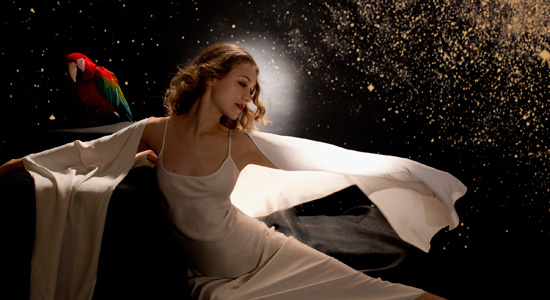 Has it really been nearly six years since Have One On Me? But it just stopped playing! (Have one on us, Samberg.) The time between Joanna Newsom engagements is more necessary—if not mandatory—than for any other active artist. She allowed a generous fortnight of examination and contemplation for every minute of music on her tripleLP opus, and still, some 70 months after its release, new shades of appreciation and meaning are leaking out of it—as they surely will be from this more direct, yet no-less-demanding successor. In the infancy of its understanding, a few things are readily apparent: that Divers—literal and figurative, profound and confounding, ancient and prescient—aces F. Scott Fitzgerald’s intelligence test; that the linear confines of a single-album format are no preclusion from going deeper than ever before; and that, in the time and space between this and her earthbound triptych, Newsom caught on to some seriously cosmic shit, her personal voyage logged as a space-time odyssey in which love is the true continuum. It’s contrition by attrition, a fiberoptic panoply of styles and contributors bundling together into a honeycomb of light, then untangling to reveal the dew-dropping spiderweb-strummer at its center, until the last pin-light is bent on this hot-dogging loon, caught there like a shard of mirror in the moon. —Noah Bonaparte Pais