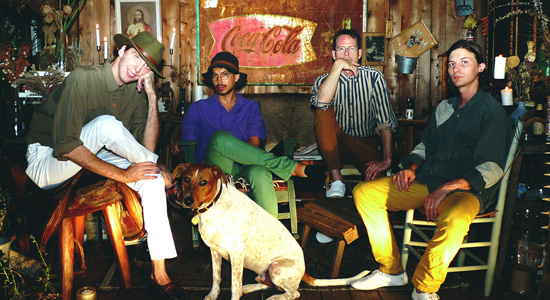 It’s been 10 years, and we probably should have seen it coming, but lo and behold, Deerhunter has evolved from art-punk outsiders to indie-rock elder statesmen. And it fits so well. On Fading Frontier, Bradford Cox and crew make a deep, textural pop record that welds their most creative and experimental traits to fairly straightforward songwriting, and it succeeds on more levels than we would’ve guessed back when Hurricane Katrina was still a fresh wound and we hadn’t yet discovered that Lost was a terrible television show.

But it all makes sense—after a decade of challenging itself its their audience, the only real challenge left for Deerhunter is to dial it up and get normcore. The results are outstanding—and still weird, don’t worry. The shuffl e-funk of “Snakeskin” and the motivational new-age jangle of “Living My Life” are warm, robust and comfortable. “Duplex Planet,” a tribute to David Greenberger’s legendary fanzine about old folks, and “Ad Astra” are clever, catchy works that connect songcraft with playful experimentalism.

Fading Frontier is a focused, mature record that lacks the hard edge and bitterness of its predecessor, 2013’s Monomania, or the avant hard-on of early works like 2007’s Cryptograms. Fading Frontier does, however, maintain the levels of excitement and vitality generated in years past. Deerhunter may have mellowed out a bit, but it hasn’t sold out by any means. The new, low-key vibes just mean the songs can stretch out, breathe, expand the band’s potential.