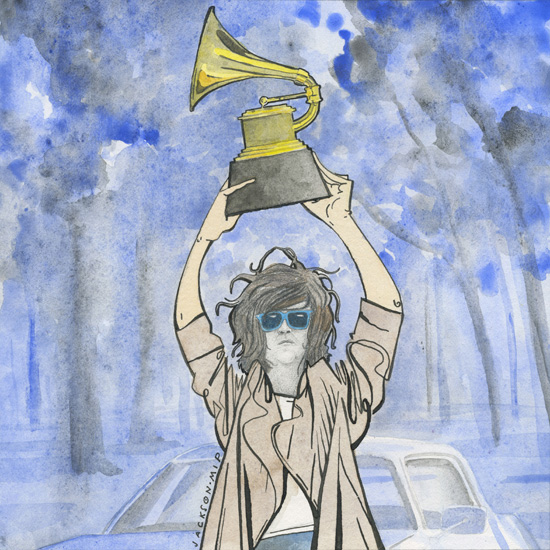 OK, so I’ve been doing these for quite a while now. Correct me if I’m wrong, but the first year I forecast in MAGNET was 1946. Lots of jokes about Glenn Miller and the Andrews Sisters that year. There is a sort of art to this. OK, that’s a reach. There’s a technique, though. Something along the lines of “Measure twice, cut once.” What you want is to come up with stuff that is a bit far-fetched, but grounded in reality. That’s where the (attempted) humor is, anyway. Yes, one year I had Beck and Jesus in an apocalyptic showdown that featured lasers shooting out of Beck’s eyes. Far-fetched? Sure. But be honest: Did that seem much more far-fetched than predicting that Beck would win the Grammy for Album Of The Year at any time in the future? Seriously, that actually happened. And when it did, it seemed like less than a big deal. But if you had put a gun to my head in 2002 and asked me which was more likely, I probably would have gone with the lasers.

Anyway, I’m confessing all this to you, my close personal friend, for a reason. The time-tested formula is in some jeopardy here in 2015. It has become almost impossible to establish a place where things are “a bit far-fetched” from any accepted “reality.” I was thinking it would be a good joke to have Miley Cyrus do a concert in the nude. And then I saw a thing online about how Miley and the Flaming Lips were planning to do exactly that. Nothing is too far-fetched. Worse, there is no baseline reality that everyone is familiar with. We each perceive the world as we scroll through it on our phone screens. The world looks very different through hundreds of millions of tiny peepholes. How do you find universal themes and assumptions in this environment?

But fuck it. That’s not my problem. Making the jokes is my job. Getting them is up to you. So on with it.

JANUARY
Björk announces a reunion tour, but then forgets to show up for it.

After a Titus Andronicus show in Chicago, someone explains to Patrick Stickles that playing punk rock in 2016 is a lot like playing big-band music in 1976. Now Stickles is really bummed out.

FEBRUARY
Donald Trump, bored with pretending to run for president, buys the Rolling Stones for $20 million and announces he will now pretend to be Mick Jagger instead. He schedules a “really classy, really first-rate” North American tour for late summer.

Will the Who be able to get through its final world tour without anyone onstage peeing his pants? Depends.

MARCH
Paul Dano and John Cusack win Best Actor at the Academy Awards for playing Brian Wilson in Love & Mercy. Dano gets the base of the trophy and immobile legs while Cusack gets the expressionless face and paralyzed upper body.

APRIL
Sleater-Kinney has its first top-40 hit with a remake of “Boogie Woogie Bugle Boy,” which makes for a neat echo of the Andrews Sisters reference from the intro.

MAY
In a new edition of her memoir, Chrissie Hynde says she blames herself not just for being raped, but for the death of Pete Farnsworth, the breakup of the Clash, the rift between Ray and Dave Davies, Thatcherism and that whole cock-up in the Falkland Islands.

Lars von Trier acquires the screen rights to Karl Ove Knausgaard’s six-volume My Struggle series. When von Trier realizes it will take him four years to adapt the books into screenplays and another five years to make the films, he shitcans the project and signs on to direct Transformers 13: Megatron Poops His Pants.

JUNE
Wilco announces a reunion tour, but then abruptly cancels it when someone explains to Jeff Tweedy that a band has to break up before it can reunite. The only date that gets played is in Detroit, because nobody in Detroit gives a fuck.

JULY
Neil Young, R.E.M. and Tom Petty show up at the Republican National Convention. Not to play—they’re just there to kick somebody’s ass.

The Pitchfork Festival gives itself a 1.3.

AUGUST
The Rolling Stones go on tour in North America. For the first time in more than 50 years, Mick Jagger is not with them. New lead singer Donald Trump pulls daughter Ivanka onstage in Hartford, Conn., for a duet on “Honky Tonk Woman.”

At the Summer Olympics in Brazil, Michael Phelps disappears into murky water during the 10,000-meter final. And that’s pool water we’re talking about.

SEPTEMBER
The Rolling Stones tour ends abruptly when Keith Richards chokes to death onstage after throwing up in his own mouth during “Miss You.”

Ryan Adams’ “cover version” of Taylor Swift’s 1989 album wins a Grammy Award for Most Elaborate Ruse To Get Into The Pants Of A Much Younger Woman.

OCTOBER
Kurt Vile, Ariana Grande and Mac DeMarco. The lineup at a festival in Austin? No, it’s True Detective, Season 3.

Bookstores welcome new music-related memoirs by Billy Idol, Adam Ant, the bass player from Tears For Fears, the cartoonist who made the “Take On Me” video, Cyndi Lauper’s dog groomer and Vanilli from Milli Vanilli.

NOVEMBER
Ben Carson is elected the first black Republican president of the United States. He is not the first Republican shit-for-brains to be elected, however.

Distraught over the outcome of the election and, well, most of the last 30 years of American history, Bernie Sanders hangs himself in effigy from the top of the Capitol Dome. Well, he hangs an effigy of himself. The real Bernie is over at IHOP for the senior special dinner.

DECEMBER
Santa Claus, sick of wish lists full of iPhones and tablets instead of sleds and toys and puppies, blows his fucking brains out. Everyone is too busy staring into their smartphones to notice there are no Christmas gifts this year.