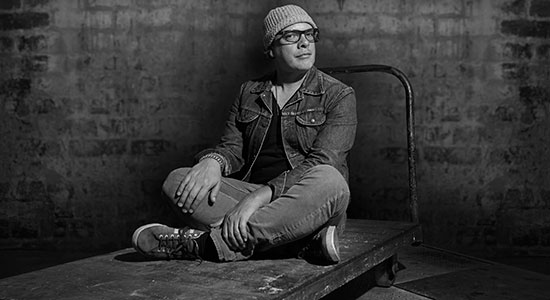 Los Angeles-based, U.K.-born electronic pioneer Mark Van Hoen (who you might know from some of his work as Locust, Scala, Black Hearted Brother or one of the other 100 projects over the last 30 years) has released new album Nightvision on Saint Marie Records. Van Hoen compiled a video mix tape of inspirations and a bit of an intro into electronic music. He has never stopped working; he’s always producing new music and videos, performing and DJing.

Cabaret Voltaire “Double Vision VHS”
Cabaret Voltaire are a huge influence on me, both their music and videos. This “Double Vision” videotape was incredible; its creative use of what must have been very limited VHS editing equipment is astounding. It’s pretty damn dark—makes my music sound like the soundtrack to a spring morning—but its depth and intensity is worth the watch. Video

Tarkovsky’s “Stalker”
The final scene from Tarkovsky’s masterpiece Stalker. A revealing end to an astonishing film. If you have never seen it, I hope this inspires you to watch the whole thing. Video

Arthur Rainbow “The Heaven Is A Musical Score”
I don’t know anything about Arthur Rainbow, other than the uploads on his YouTube channel. I know he’s Mexican and makes some wonderful tripped-out music and ‘80s VHS glitchy videos to go with it. Great stuff. Video

Iggy Pop Interview
An interview with Iggy Pop on French TV in ’77. It’s just so funny, freakish and insightful into another time that cannot be with us any more. Video

Mark Van Hoen “Bring It Back”
The video to my own track ‘Bring It Back’ from my new record Nightvision. Like the music, the video uses a hybrid of analog and digital techniques, and has been modulated by various elements of the music to increase its close relationship to the audio. Video

Nattymari “Illy Illelle”
Nattymarie is someone else I know very little about, other than the fact he/she is very prolific, sometimes uploading new music videos every day. This is one of my favorites. It’s an insane bit-crushed jam matched with what looks like a recolorized computer gambling website … disturbing and trippy! Video

Seefeel “Industrius”
Seefeel live in Moscow in 1994, performing “Industrious” … a bit of nostalgia for me. I was doing sound for them at the Moscow Youth Palace. Seems like another lifetime now. They were a great live band. I wish that they had released more records and continued touring. Video

Alice Coltrane
Alice Coltrane has been an inspiration to me ever since I bought her record Universal Consciousness back in 1993. I didn’t know who she was. The LP sleeve looked interesting, and I thought it might have something to do with John Coltrane. There’s very little video of her, but this is an interesting clip, and I love the music, too. Video

Miles Davis Live
There’s nothing much to say about Miles Davis in this phase. It just speaks for itself. He’s at the pinnacle of his inventive career here. I only wish that I was old enough to have been able to be present at one of these shows. Video