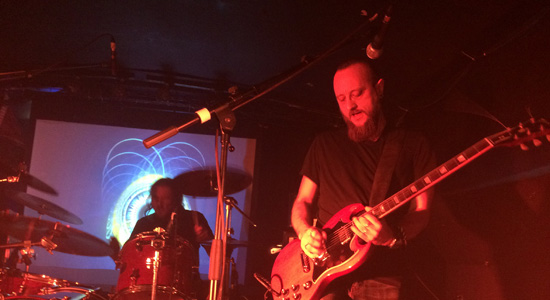 If potheads didn’t exist, it would be necessary to invent them. Who else would have found a treatment for glaucoma?

But one mustn’t paint with broad brushes when describing a social group. Stoner-rock groups, for example, typically try to stupefy or pummel, whereas Glowsun focuses on setting a mood.

At the start of tonight’s set, drummer Fabrice Cornille carefully places a lit stick of incense at the edge of the stage. A fog of dry ice billows into the crowd like a cottony tsunami in slo-mo. Were it not for the long and narrow dance floor in this houseboat-cum-concert hall named La Péniche, one would think it was late at night in a freshman’s dorm room. A tension, so palpable that you could clip it with a roach, has been firmly established.

Glowsun accompanies the mood perfectly. Guitarist Johan Jaccob and bassist Ronan Chiron pluck out the slow, hypnotic opening lines of “Death’s Face” to conjure a soft eeriness; wind chimes and a light play of cymbals accent it, then a riff builds into a vigorous gallop. In fact, most of Glowsun’s work alternates between establishing a creepy vibe and setting that vibe ablaze.

The band’s latest album, Beyond The Wall Of Time, is a major step forward for the French trio. With greater melodic diversity, more prominent drums, a wider sonic palette and a more adept hand at arrangements, the LP adds a polish that enhances the power. For the most part, the song remains the same, but now it’s more expertly executed.

Stripped of the studio noodling, the band delivers an impressively muscular performance live. Although squarely within the realm of stoner metal, Glowsun dials down the doom. And where Harsh Toke chases the exhilarating rush of turbo psychedelia and Earthless that of jam-band freakouts, Glowsun is more controlled. Riffs thump and rhythms thunder, but the group favors the undeniably satisfying payoff of structured compositions built on a strong central motif.

Fortunately, everyone had on hand the perfect remedy for nausea.