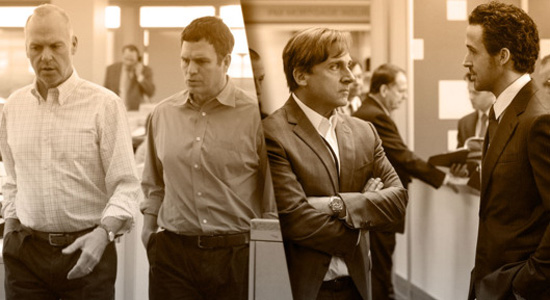 Take it from us, these are the five finest movies of 2015. The Big Short and Spotlight, both dealing with ripping off the bandages that cover America at its worst, are tied for the number-one spot, with the other three listed in random order.

The Big Short
In the opening scenes of this Adam McKay-directed masterpiece, financial terms come darting at you like frightened birds flushed from the woods—some familiar, most totally unknown. A couple of bottom-rung stock-market guys, played by Christian Bale and Ryan Gosling, seem to be the only ones who have figured out that an avalanche of bad sub-prime home mortgage loans, recklessly written by prestigious Wall Street banks, are about to fail in 2007. These two convince a hedge-fund operator, played by Steve Carrell, that this will deal something close to the death blow to the American economy in a way that might approach the stock-market collapse and ensuing great depression of 1929. It’s so hypnotically terrifying a situation, it’s like you’ve got the sleeve of your raincoat caught in the back door of a taxi just as the driver speeds away with his window rolled up so he can’t hear your screams.

Spotlight
The pace of this heroic factual account of the Boston Globe‘s uncovering of pedophile Roman Catholic priests in the Boston archdiocese, 15 years ago, might give a severe case of whiplash to the unwary. The six members of the Globe‘s Spotlight investigative team, led by Michael Keaton and ace reporters played by Mark Ruffalo and Rachel McAdams, have discovered the story of one such Boston padre. Before they are through, their list includes a jaw-dropping head count of 87 pedophile priests, in the diocese alone, who have been hidden away in places found for them by the Catholic church, content to sweep such unsavory practice under the holy carpet. The paper trail leads to Cardinal Bernard Law, played by Len Cariou, who has known about this situation for some time and has done nothing about it, other than move the padre in question to a parish where he won’t be recognized.

Love And Mercy
It’s high time someone caught on film the roller-coaster ride that has been the life of Brian Wilson, the genius leader of the Beach Boys. From long and lanky composer of some of the most brilliant pop/rock from the ’60s to the overweight, mind-blown, almost child-like captive of Dr. Eugene Landy two decades later, Wilson seems doomed. Paul Dano plays the young Brian, whose meddlesome dad, Murry (Bill Camp), becomes such a road boulder to the Beach Boys’ career he is fired by the group. Brian even meets with resistance from Beach Boys lead singer Mike Love (Jake Abel) who complains that Brian’s ’66 masterwork, Pet Sounds, is “too wimpy.” But Murry and Mike seem like the good old days when Landy (Paul Giamatti) sinks his claws into Brian. Fortunately, Brian meets Melinda Ledbetter (Elizabeth Banks) at a Cadillac dealership, and she takes the middle-aged Beach Boy (now played by John Cusack) under her wing, just in the nick of time.

Trumbo
One of the saddest stories from the post-World War II witch hunts intent on rooting out Communists from the American way of life was the time spent in jail by top-rank screenwriter Dalton Trumbo. He refused to knuckle under to “better dead than red” forces that would culminate in the insane Un-American Activities lynch mob of U.S. Senator Joe McCarthy in the early ’50s. Trumbo is the perfect vehicle for Bryan Cranston, everyone’s favorite middle-aged success story, who turned his career around with his brilliant work on TV’s Breaking Bad, some years ago. Helen Mirren pulls off her bitchiest role ever as vengeful gossip columnist Hedda Hooper, intent on seeing Trumbo suffer for his former political beliefs. And the trouble didn’t stop with the screenwriter’s release from prison. He was now on the Hollywood black list and could find work only when the film that employed him did not display his name in its credits.

The End Of The Tour
This two-man tour de force is perfectly played by a pair of today’s strongest young actors. I believe when I saw this I wasn’t aware that its two characters were based on real people. Writer David Foster Wallace, played by Jason Segal with the top of his head wrapped in a bandage, and Jesse Eisenberg as David Lipsky, the Rolling Stone writer doing the interview, couldn’t have been better chosen. For anyone who has interviewed people who were once personal heroes, the film hits home on another level altogether. I’ve been lucky enough to conduct more than 800 interviews for various magazines and CD liner-note projects over the past 30 years, so it was a gas to follow someone else’s train, for once. The more poignant side of this work puts a different slant on things when it’s revealed while Lipsky is listening to his tape of their meeting, that Wallace has recently committed suicide.

These also ran
I’d hoped to include a pair of bone-chilling pictures that must have made some customers complain to management to turn up the heat in the theater. The Hateful Eight, the latest from Quentin Tarantino, seemed too similar to his first movie, Reservoir Dogs, and not quite as riveting despite the best efforts of Samuel L. Jackson and Kurt Russell. I love a “talkie” as much as the next customer but not at the expense of cinematography, difficult to achieve inside a log cabin in the dead of winter. Plenty of stunning wide-angle shots of frozen wasteland in The Revenant, however, where Leonardo DiCaprio as a 19th century fur-trapper, should have had a frostbite clause worked into his contract. This Alejandro González Iñárritu epic would have been much improved with at least a half hour lopped from its final run.

Sideways glance
Will DiCaprio continue the run of Eddie Redmayne’s Oscar win last year for best actor with the least amount of recognizable dialog? Eddie pulled it off with the non-verbal utterances of Stephen Hawking, and Leo could do it this year with mostly the grunts and groans of a man left for dead in a shallow grave 200 years ago in the sub-zero wilderness of the Louisiana Purchase territory.