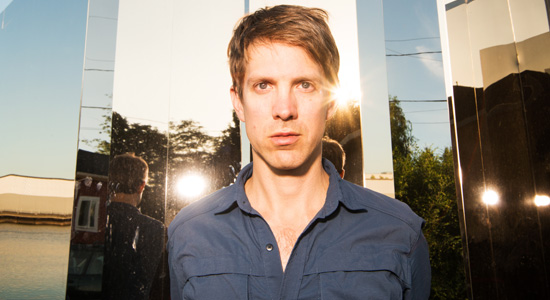 “My favorite music, my favorite art, everything like that, has the quality of being paradoxical, of holding multiple things at the same time that seem both to be true,” says Shearwater’s Jonathan Meiburg. “I wanted to make a record as much like that as possible.”

That record is Jet Plane And Oxbow. It’s an album that looks backward—to the recording technologies and sounds of the early ’80s—in order to interrogate the present and to contemplate the future.

“I wanted to use that time and those sounds to sort of explore what seem to be the various pathologies that lurk beneath the surface in the United States,” says Meiburg. Shearwater’s moody, thoughtful style, built around Meiburg’s dramatic, beautiful voice, turned toward rock with 2012’s Animal Joy, which now sounds like a stopover in the flight path toward Jet Plane.

“I think it’s the most extroverted record we have made, by a mile,” says Meiburg. “It’s loud; it’s got a lot of drumming; it’s texturally complex, although melodically it’s actually pretty simple. We tried to place the record, sonically, about the year 1980. I think of that as a time when digital technology was relatively new in the world of recording. There were these strange devices that people were opening up and seeing what they could do to recorded music. There was a real sense of excitement and possibility, although they also seemed like gadgets from the future.”

Meiburg used period-specific instruments like a Korg Lambda, an Eventide Harmonizer and Linn drums; his guitar playing alludes to Adrian Belew’s work with David Bowie and Robert Fripp’s with Peter Gabriel; he integrates the stark sounds of Joy Division and early New Order. But the goal wasn’t nostalgia. Jet Plane And Oxbow doesn’t sound retro, nor does it sound like an homage. The allusions are there to create a sonic parallel to our time.

“There was a sense that technology was going to change everything about the world, but nobody knew exactly how,” says Meiburg. “And I think we have that same feeling now, as real artificial intelligence becomes not just a figment of our imagination of what the distant future might be like, but what it might be like in four or five years. The music in the time reflects that: There’s a lot of excitement, but there’s a lot of paranoia in it.”

That’s a good description of Jet Plane, too. Meiburg may be singing about feeling “so tired of the country” on “Pale Kings” or about feeling culturally conflicted on “Quiet Americans,” but the music is full of affirmation and grandeur.

“The thing I like about the record is the more anthemic the songs became, the more ambivalent the lyrics became. ‘Pale Kings’ sounds like this victory rock song, but it’s really about this frustration and the myopia that creeps in with nostalgia or with too simple a view of who you are or what you’re doing here,” says Meiburg, who calls Jet Plane a “protest record,” although not in a traditional sense: There’s no sloganeering or proselytizing, which he hates.

“I heard an interview that David Bowie did in 1980 when Scary Monsters came out,” says Meiburg. “He described that record as social protest music. I thought, ‘What?’ But I went back and listened to it again, and I thought really actually it is: It lodges a whole lot of different protests; it’s not just the lyrics, but it’s also the sound of it. I loved that about it. It’s kind of an oblique protest record, not so much in the realm of politics as in the realm of the psyche.”

The paradoxical tensions between beauty and anger, subtlety and power, affirmation and doubt also come through in Meiburg’s voice, which is, as usual, gorgeous.

“It’s probably what makes Shearwater sound like itself,” says Meiburg. “I’ve had to untrain my voice over the years, and I’m still doing it. I grew up singing in choirs and stuff, and learned to sing in a certain way. I realized that that was not going to work in a band. I’ve been trying to shove my voice into a place that seems truer for more than a decade. This record seems more true to who I am than the previous records to me.”

Jet Plane is the eighth Shearwater record. Meiburg has been the only constant since 1999 when Shearwater was a parallel project to Will Sheff’s Okkervil River and the two bands shared players.

“I finally seemed to have gotten clear of the ‘Okkervil River side-project’ tag,” he says. “It’s taken many years of hard work to do that. I don’t bear Okkervil any ill will whatsoever, but trying to convince people that you’re not a side project or a folk band is a long and hard road. That’s sort of why I stopped playing the banjo in public. People would take pictures and those would be the pictures that would show up, and then it would become ‘folk band Shearwater.’ That did nobody any favors. I love the banjo, but we just can’t be seen together.”

Meiburg is at work on a nonfiction book (“It tells the story, basically, of the evolutionary history of South American wildlife and landforms through the 10 living species of caracaras, which are these strange falcon relatives that are sort of like crows, and the people who live with them now, and a 19th-century naturalist and writer named William Henry Hudson”), and Shearwater’s touring schedule is limited for now, although Meiburg is optimistic.

“I feel like this record could have a lot of legs to it,” he says. “At the same time, I’ve been at this too long to hope for things almost anymore. I think it’s better to try to get your fulfillment out of doing a good job than hoping that suddenly you’re going to catch fire in some way.”