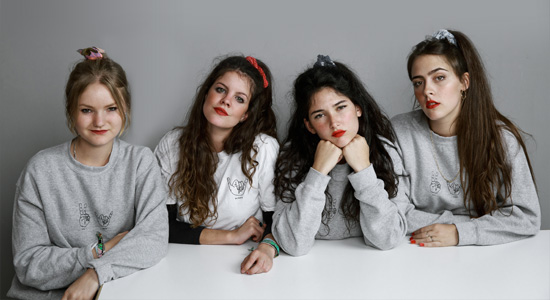 It sounds strange, but it’s entirely true, swears Spanish musician Ana Garcia Perrote. What led to the success of her all-girl garage-rock quartet Hinds—and its jangling debut, Leave Me Alone, the first great album of 2016—was one glaring, abject failure, which shuttered the group for nearly two years. Just for fun, she and her fellow singer/guitarist Carlotta Cosials had formed a DIY duo dubbed Deers, specializing in cover songs. Eventually, they were confident enough to start giving concerts. That is, until the second gig they booked ended in disaster.

“It was like a trauma,” says Perrote. “Carlotta used to be an actress, and I used to act in a school-theater thing. So, we were both used to being onstage.” They felt more vulnerable playing music, though. That night, for a small audience of family and friends, they squealed through Bob Dylan, even Jack Johnson chestnuts. “And Carlotta, after the very first song, whispered to me, ‘Should we leave? Should we just walk offstage?’ But we just couldn’t leave.” Afterward, in tears, they were too ashamed to vacate their dressing room.

The pair didn’t discuss the debacle. They simply stopped performing. A few months later, they saw a grainy video of the concert and realized that it wasn’t so bad after all. Inspired, they composed their first fuzzy original, “Trippy Gum,” a week later, added bassist Ade Martin and drummer Amber Grimbergen, and found their own ’60s-echoed sound on Leave confections like “Easy” and “Garden.” Then? Another hurdle. They were forced to legally change their moniker, due to licensing conflict with a Canadian combo called the Dears. They settled on Hinds—by definition, a female deer.

But Perrote is still pleased that she and Cosials took time off to reconnoiter. “We didn’t stop playing because of lack of interest in music,” she says. “When we stopped having fun? That’s when we stopped playing.”