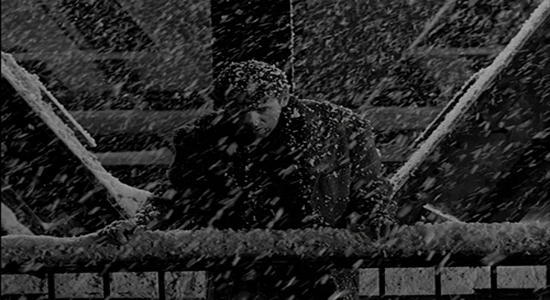 Lawrence: Snow, while not often the most convenient weather, is surely the most beautiful and evocative. Except for disaster-inducing storms like tornadoes, no other weather can so quickly and thoroughly transform the environment or forge community connections, through rituals like shoveling sidewalks and digging out cars. Another great thing about snow is how wonderfully it photographs. For me, any movie scene is automatically elevated by the inclusion of snow, to the point where no film containing at least one snow scene can be all bad. A few random great ones:

My Night At Maud’s: The morning after said night, Jean-Louis trots across the street to his car and brushes snow off the windshield with his hand. He starts the engine, his tires take a couple seconds to find traction, and snow is still falling faintly as he pulls away. Half a minute long, but so immediate and bracing, it stays with me more than any other scene in the movie.

The snow in the opening Christmas-shopping sequence of The Bishop’s Wife is likely fake. But it’s so perfect, I don’t want to know. Credit cinematographer Gregg Toland.

Janel Johnson recently reported for public radio on the quiet that accompanies snow, which it turns out is a natural sound absorber. The protracted anti-showdown of McCabe And Mrs Miller‘s last 20 minutes, with Warren Beatty and the three men trying to kill him, the only townsfolk not attending to the burning church, is a striking cinematic example.

In the first hour of the BBC Tinker Tailor Soldier Spy, the Alec Guiness version, Smiley and Peter Guillen pull over to the side of the highway. It’s night, a patchy snow is on the ground, and just in the headlights you can see a fine wet snow still falling. Peter gets out to check the engine, gets back in the car. A semi also pulls over, a few yards ahead of them. All this while the two discuss the current state of affairs at the Circus. That’s all that happens; it’s riveting.

Guy Madden’s noirish ode to his hometown, My Winnipeg, is essentially one long extended snow scene. It always seems to be the shortest day of the year in Winnipeg and always nighttime. The harshly lit street scenes, scattered throughout the film, are magnetizing, hypnotic. They manage to make mid-winter’s bleakness attractive (or at least compelling).

Nobody is better at filming weather, especially at night, than Frank Capra. (See, for instance, the rain in Meet John Doe or It Happened One Night). The snow falling indifferently in It’s A Wonderful Life, as George Bailey contemplates suicide on the bridge, may top this list.