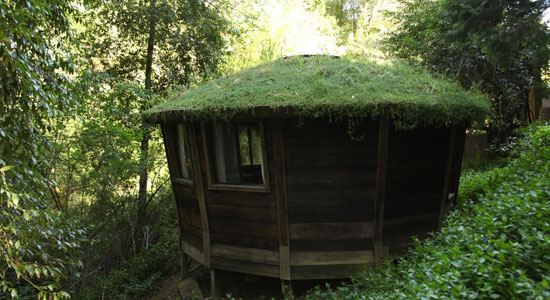 I really shouldn’t be telling you about this. It’s one of those things that I don’t think too many people should know about. I was dragged here by Holly Muñoz on our country-western duo tour last year. I’d noticed there were a couple days-sized hole in the itinerary, and being a guy who thinks days off are for the weak and undisciplined, I gave her no less than a king-sized ration of shit for it. “Trust me,” she said. “If it makes you feel better, we are playing both nights.”

Our car headed off the highway at Ukiah. We’d stopped to buy groceries, and we turned on to a road that wound thru the hills on endless switchbacks. Soon, our cell phones reported back that we were beyond the reach of civilization and its discontents. We pulled into what appeared to be a functioning scale model of Rivendell. A slice thru steep, redwood and pine forested mountains was populated by a motley assemblage of wooden buildings, yurts, gates, bridges and gardens that were manicured but in the most gentle of hippie stylings. We loaded our stuff on to a pushcart and wheeled it up to the main lodge and set up our gear in the dining room, around a lovely old upright piano. At one point a guy frantically thumb swiping his phone asked about the WiFi for the area. The guy at the front desk responded with nought but a bemused smile. The point of this place is to reconnect with nature and yourself.

Holly had visited Orr many times, and had even worked out a deal to barter our stay for being the musical guests for the two days. Normally that barter would be for the right to pitch a tent in the campsite, but since we were dealing with international rock star KS here, we were bumped up to private rooms, of which there are a handful. All showering communal and so is the kitchen. You bring in your own groceries, and you can make use of the incredible gas range that has something like a dozen burners. The kitchen is stocked with every kind of kitchen tool you can imagine, and there’s a plastic tub of odds and ends that people leave behind—maybe they didn’t want to pack out their unused butter, or olive oil. In general, if you were missing something, somebody had it. It’s definitely intimidating to cook with strangers around, but you have to remember they feel the same way. When you’ve done your cooking, you clean up your cookware and then sit down in the dining area to eat. It’s all quite small, there was never more than 10 people in the little dining room at one time. I would guess there’s prob 40-50 people staying at Orr at any one time. You can have a lot of space to yourself, but you also learn to share. So, after we ate, we did perform for about an hour. Note, that people weren’t really expecting us, despite the flyers that were posted here and there. And most of them were so blissed out from their day in the waters that I’m not even sure we registered. I was curious to know what they seemed to know.

After we played and did our dishes, it was time to get in the waters. Note that because the sides of the cut that Orr is situated in are so steep, it gets dark early; it adds to your sense of being out of the normal time and pace of life on the outside. Basically, there is a long building, and guests have a door code to enter. The architecture has much more in common with Neil Young’s ranch (oh, wait, you’ve never been invited to dine at Neil’s house? Well, you’ll just have to imagine, then) than some spa in the Swiss Alps, to give you the vibe. Once in the building you approach a changing area. One. For everyone. Humans of all genders ages sizes will be getting undressed around you, and so will you. It’s wonderful. No one gives a shit. The bathhouse, as it were, is a long shoebox facing sideways. So, along the long front wall, there are individual rooms, each with a bathtub. You don’t need to lock the door. You just close it, and people know the room is occupied. Each room has a bathtub that you let the water run thru; I don’t think they have stoppers. When the thing is overflowing, you just shut off the tap. and you could find a pace of running the water that keeps the tub perpetually full. So this is hot, mineral-enriched water straight from the source. There is something of a womblike experience happening here. The connection you feel to yourself and the water and the place as it all envelops you is so hypnotizing, so rejuvenating … almost out of body. On the back side of the building there are showers (the only ones for the whole place) and some large- and medium-size pools for group soaking. There’s also a steam room and sauna powered by the source. And a large swimming pool of ice-cold water for that endorphin rush post sauna. But the piéce de résistance are the tubs on the roof. There are two of them. And they were empty when we went to have a look. Like the old bathtubs in the individual rooms below, you let the water flow perpetually. Remember, you are a good 45 minutes from any town, and 20 minutes from other houses. There’s nothing around you but mountains and trees. So, you lay in this tub, and look up. At a billion billion stars. They seem to be descending in a spongy mass. The more you look, the more you see even fainter and tinier stars in places you thought were void. A star falls every five to 10 minutes. Can’t be missed. The experience cleans up your inner hard drive like no other. It’s like getting a massage from God on your very soul.

Just up the road from Orr there’s a redwood grove with trees some nine feet across and 250-feet high. We walked thru that, and I spent maybe 3 hours in one of the individual tubs. I could leave. I kept thinking, “OK, I should, uhhh uhhhhhhhxhhzhzhzhhhz.” I was in a state somewhere on the border of sleep and wakefulness. I had reached the point where my mind was no longer thinking. Just letting the moment exist without comment. I say I’ll be back, but part of me is still there, turning in the flow.