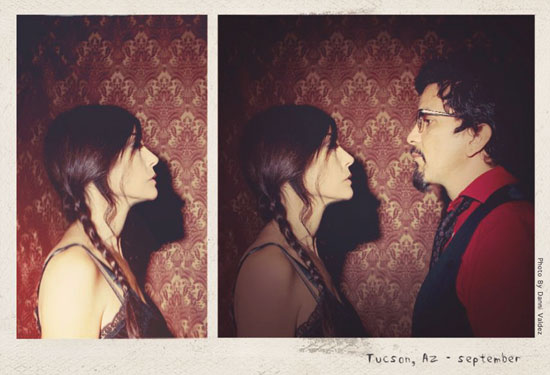 Auer: Indeed, this extended run of pop-up shows on the current Posies Solid States Secret Shows tour takes us to places both unlikely and unexpected. It’s not just the audiences who don’t know what or where they are eventually getting themselves into; with few notable exceptions, it’s a mystery to us as well. From a dusty backyard in Phoenix (replete with a fire pit and a few unseen scorpions, methinks) to a carpeted Unitarian church near Atlanta (where an almost Dionysian pre-show potluck occurred), no one in attendance, including us, is left wanting for variety and uniqueness. It also provides ample proof that there are many intriguing people to meet along the way, as evidenced by the sold-out turnouts and new friends and re-connections made. We decided to make a last-minute stop in Tucson on May 2 for a show at the R-Bar (adjacent to the historic Rialto Theater), and I was impressed at how bustling and vibrant the area around the venue was, even if and especially on a Monday. It was almost like being at a mini-SXSW in a way, circa 2001, when SXSW wasn’t as over-run as it is now.

This was a Posies duo show, sans drums, and we set up on the floor of the bar all-living room-style and delivered our make-it-up-as-we-go-along setlist to some real diehard fans while a series of random movie clips played on a giant screen behind us. Naturally, every once and a while, when I didn’t have to sing, I was compelled to do a 180 and take in the view the folks in the audience were getting, and I have to say, combined with a bit of residual jet lag and what can only be coined as “long-drive delirium,” the marriage of the images coupled to the sound of our music was exceptionally surreal, like we were at the epicenter of an After School Special musical version of a David Lynch film. I’m fairly certain the fact that the entire color scheme of the bar was red (chairs, walls, floors, large cactus statue on a red-brick-coffee-table type of thing—even my guitar and Ken’s keyboard were and are still red) upped the psychedelic Twin Peaks vibe ante a bit as well. To quote Bill Murray’s indelible character Carl in a key point of the movie Caddyshack, the whole scene at the R-Bar (and then by osmosis becoming a somewhat dreamlike byproduct in my overstimulated brain) on this particular evening was rather “striking.”

After the show, we stayed at a house on the outskirts of town, and our hosts for the night were Daniel Martin Diaz and Paula Catherine Valencia. Both were impeccable in their hospitality, very warm and friendly, and obviously and naturally aesthetically inclined as their home colorfully reflected a sense of symmetry and taste. Musical instruments and other sound-making devices were brought out for us to examine, and though we’d all intended to rest up after the show, somehow, quite organically, the evening morphed into a trippy drone of a jam session based on a guitar loop I created followed by some inspired late-night conversation. I discovered Daniel is a fine artist with incredible detail in his work, which is both grounded in echoes of this earth yet somehow other worldly at the same time, no easy balance to strike, in my opinion. Paula (using the stage name Amanda Poe) fronts a band that Daniel is also in called Crystal Radio. She sings with an expressive, cinematic voice, and the music sounds especially good while driving through desert terrain. At the end of said night, Daniel was generous enough to give me a bound collection of his art compiled with some writings called Soul Of Science, and it’s very impressive to say the least, a heavy sacred geometry vibe, page after page. All in all it was an evening for the book(s) (pun intended), and it really seems like they have their life together dialed in. Here’s to you, Daniel and Paula.