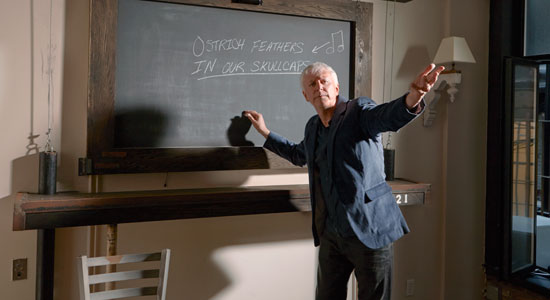 No, friends, MAGNET did not issue this 23rd Guided By Voices album ourselves, your “GBV Inc.” jokes notwithstanding. (Please do see our power-pop sister imprint, Keene Bros. Ltd.) GBV, it seems, had little more to do with it, unless you consider band and head beerleader Robert Pollard interchangeable. (Forthcoming in our online Nonvintage Movies series: Synecdoche, Ohio.)

An A/B comparison with Of Course You Are—the last mile marker in Pollard’s marathon against himself/selves/elves—confirms that of course they aren’t. (Except when they are.) Pollard has made solo (and, pity the stepchildren, “side-project”) recordings with bandmates that sound like buckshot GBV albums; he’s now made a GBV album for which he wrote all the songs and plays every instrument, and it sounds like a buckshot GBV album. (Except when it doesn’t.)

If the parenthetical paradoxes smell of a riddle/mystery/enigma turducken, blame/credit goes to mischievous Uncle Bob, whose story tonight starts with a rooftop-shouted APB for “My Zodiac Companion” (the most soul-stirring, arms-calling GBV charge since either “A Salty Salute” or “Fair Touching,” depending on how late you kept the club open), then skips through six meadowy minutes and slips down a rabbit hole. Signposted by a “Day In The Life” tape loop and static scratched off Millions Now Living Will Never Die, Pollard is trapped for six tracks in a paisley insectarium: an orderly, workmanlike march of grasshoppers and caterpillars darkening to an after-hours arrival of the Quickers—as malicious-seeming as any Stephen King entity—at a Bates-modeled Hotel X. Right before he pulls the curtain, a marching-band punchline stops it.

Except that it doesn’t. His pupils still swirling, Pollard uses the back six to toggle from fretful tone poems (marvel at the guitar épée that ends “I Think A Telescope”) to reassuring rock climbs (the title track, “Unfinished Business”) to PTSD relapses (“Nightmare Jamboree”). His “Defeatist’s Lament” answers lucid group therapy (“Can we live without nets/In the empire of the bottle?”) with blotto Syd Barrettisms (“A louse on its knees/Sees beneath trees”). But then candor isn’t what Please Be Honest promises. If a smokestack tenor spewing a cloud menagerie is your kind of daydream, the faulty superhero came through once again.