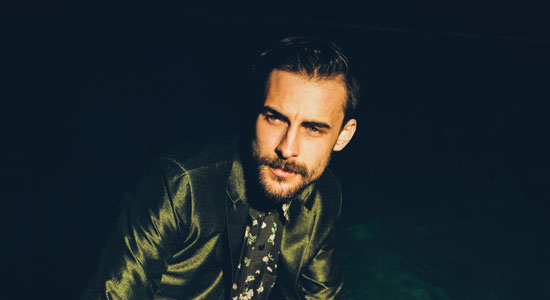 On his self-titled third release, Robert Ellis refuses to walk the line

Robert Ellis is out to dismantle the Texas troubadour mystique. He may not come out and say as much, but it was glaringly evident at his South By Southwest showcase this past March. Ellis couldn’t have been less the self-possessed strummer as he and his band battled house music that continued to play over the PA during their set and an industry crowd responding with varying degrees of interest. He spent a significant chunk of time on keyboards, and when he did strap on the guitar, his solos were vicious. It was the sound of exceptionally talented musical misfit telling his audience, “Submit to the controlled chaos or go home.”

The same goes for Robert Ellis (New West), the Lake Jackson, Texas, native’s aptly titled third album. “There’s definitely an angsty teenager inside me itching to come out,” says Ellis over a late breakfast at a busy Mexican joint on Austin’s South Congress Avenue. “A lot of that is just self-competition—like seeing if I can do a pop jam or pushing myself to have a Duke Ellington bridge in a song. All that shit is just me trying to stay interested when I’m making music.”

After a pair of solid releases that established Ellis as an eccentric singer/songwriter with a traditional country foothold, his latest is as definitive and weirdly beautiful a statement of defiance as you’d expect from a guy whose primary touchstones are Paul Simon and Randy Newman, as opposed to Townes Van Zandt and Jerry Jeff Walker. Perhaps that’s why the two best tracks on a uniformly great record—the structurally sophisticated yet effortless opener “Perfect Strangers” and the brooding, soulful “California”—are keyboard-based. Already an acknowledged ace on guitar at 27, Ellis has been reacquainting himself with the keys over the last few years.

“My mom’s a piano teacher, so that was my first instrument,” he says. “But then I fell in love with the guitar, and I didn’t play for a long time.”

In the midst of a discussion about “California,” there’s a mention of Doobie Brothers keyboardist/crooner Michael McDonald—and it didn’t come from Ellis. But he’s fine with it. “Totally,” he says. “We’ve been described as a redneck Steely Dan. I don’t think we have a lot of people who sit on the fence with this new stuff. We get a strong response, one way or the other.” And when he’s not on the road willing his way into the good graces of skeptical audiences, Ellis has got a pretty lucrative side job.

“Me and my band have church gigs when we’re back in Houston,” says Ellis. “The church we play at is held at the House of Blues—we’re a like a cool Americana band. There’s fuckin’ serious money in playing for the Lord.”

Not that Ellis is religious or anything. “But I really enjoy it,” he says. “I grew up going to church, and I like getting up early and making money before 11 a.m. But I think it would be difficult for me to have any kind of faith in anything. I’ve been pretty far down the rabbit hole, so that would be pretty hard to reconcile, you know what I mean?”