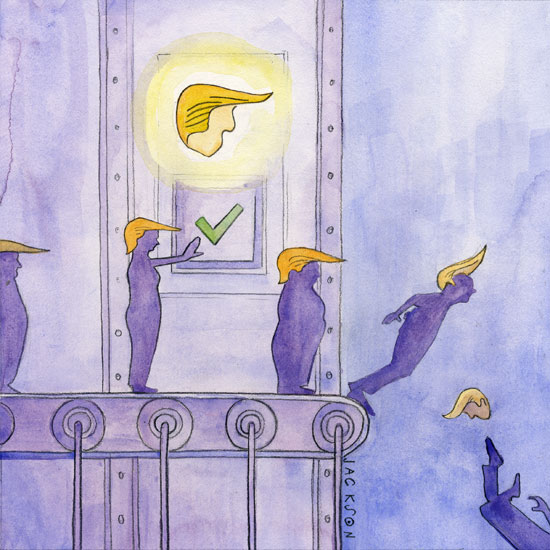 Sebadoh is helping me understand this Donald Trump thing. If that doesn’t make sense to you, then you’re probably a normal, even high-functioning specimen of human. I’m not claiming to be either of those, but I still think there’s something worth sharing in my Sebadoh analogy.

So here goes: We’ll start in the present day. For the last few months, I will admit, I’ve been spending way too much time watching CNN and other networks as they try to make sense of Trump’s emergence as the likely Republican nominee for president. It’s been quite the experience.

I should fill in the background. I’m from Philadelphia, a short drive from Trump’s two most concentrated business centers: New York and Atlantic City. So anything Trump was doing in the 1980s, 1990s and 2000s was well known to people in the Philadelphia area.

As a sportswriter, I covered a couple of the big boxing events that were staged in Atlantic City. You couldn’t go to a press conference, before or after the fight, without seeing Trump or Don King. There’s probably something useful in that juxtaposition, but I’ll leave that for you to work out on your own.

I was in the same room with Trump almost 30 years before he became a presidential candidate. I was obviously well aware of his later exploits, especially his second career as a reality-TV star. I spent three decades being aware of Trump, and it never once occurred to me to take him seriously.

That changed as Trump began earning millions of votes on his way to being one more election away from the U.S. presidency. I didn’t think much of George W. Bush for all the years he occupied center stage in our national life. But I took him seriously when he was handed the White House, and he used that power to lead the country into the Iraq war, arguably the worst presidential decision of the last 40 years. That decision has led to a lot of unforeseen consequences, including the rash of terrorist attacks launched by ISIS and its idiotic supporters.

There’s a difference between taking someone seriously and respecting that person. I would take cancer seriously if it showed up anywhere in my body. That doesn’t mean I would like or respect the sonofabitch.

So that’s the background. Back to the present moment. On Easter, I was at a lovely social gathering where conversation turned to politics. One of the guests was talking about the Trump phenomenon as if it were a UFO sighting. She was truly perplexed by the whole thing.

“I don’t know anyone who is voting for him,” she said. And that reminded me of the famous story about Pauline Kael, the legendary New York Times movie critic who said something similar about Richard Nixon in 1972. No one she knew voted for Nixon, she said, not realizing that said more about her range of acquaintances than it said about Nixon.

And this is where all of this comes back to music, which is the primary area of interest for readers of MAGNET. This is where Sebadoh comes in. This is also where I have to concede that the way my brain works probably isn’t all that instructive to anyone who has a brain of his or her own.

When I was young, I was passionate about the music that moved me. I still am to a certain degree, but now, it’s enough that I like it. I really don’t care if you or your friend Mike or two million Spotifyers like it. I hope you do, but that’s your lookout.

At some point, and this is where Sebadoh falls into the mix, I became increasingly frustrated by the gap between the music I loved and the music that was commercially successful. Sebadoh’s Bakesale was my perfect example. My belief at the time was that most people, if they heard Sebadoh (or Pavement or Guided By Voices) on their favorite radio station, would like that music instead of the shit they were being spoon-fed. The problem was in the way popular culture was being presented to people. The problem was not in the people themselves.

Let’s repeat: The problem was not in the people themselves. I believed most people—given access to what I considered smart, superior, worthwhile music—would come to enjoy that rather than the mindless shit they were hearing on the radio.

I was wrong. I’m not sure when I figured that out, but I did. It became abundantly clear to me at some point that people were wired differently. My belief that people were fundamentally the same was based on a well-meaning but erroneous view of the world. They’re not the same. In fact, they’re very, very different from each other.

Music taught me that lesson. Once I accepted that the young person listening to whatever crap was on the radio enjoyed that music as it was, and would never listen to or care about the music I thought was so great, I stopped worrying about it. I could make the perfect playlist of perfect songs by Uncle Tupelo, the Stones, the Wrens, Elliott Smith, Liz Phair and the Mendoza Line. I could turn that playlist over to another person. That person would simply never hear that music the way I heard it. They would never respond the way I responded. They might like it, but they would go right back to listening to whatever it was they really liked.

That lesson has helped me through the Trump-mania that’s dominated the news. The younger me would be infuriated, believing Trump supporters would change their minds if they were only exposed to more information. Now I realize that has nothing to do with it. People are simply different. Their brains work differently. Some don’t work all that well.

So I guess I’m hoping that there are enough people who think at least somewhat similarly to the way I think, that there will be a surge of voters who reject Trump’s candidacy. But I know better than to think that has anything to do with logic or common sense or reason.

It just means I hope to hell I don’t have to be governed by him.