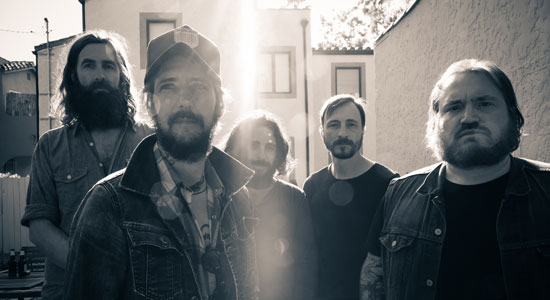 Sharing a living space with five females can do weird things to a guy.

It can compel him to say things like, “I’ve got a lot of love in my heart,” to a theater full of 1,200 frothing fans. It might also prompt the same father of four girls to issue a conciliatory ultimatum to the ranting dickhead who’d just reached onto the stage and quaffed his drink mid-song. “You paid good money to come here, man. Just be cool, and you can stay,” urged Band Of Horses frontman Ben Bridwell.

Security guards had other ideas, escorting the irate fan out of Wilmington, Del.’s Playhouse on Rodney Square to chants of “Asshole, asshole” from the rest of the crowd.

“Sorry, ya’ll,” said Bridwell, ever the Southern gentleman, as the band quickly re-harnessed the positive energy of its first full-scale, plugged-in performance in quite some time. “Seriously, ya’ll are great.”

In a May 21 dry run for their summer tour, Band Of Horses kicked things off with the first four songs from their new album, Why Are You OK (Interscope/American). Reserved seating quickly became a moot point as the audience rushed the stage, prompting a wide smile from typically stoic guitarist Tyler Ramsey. A half-dozen songs into the fierce 90-minute set, everyone in the group—Ramsey, Bridwell, multi-instrumentalist Ryan Monroe, bassist Bill Reynolds and drummer Creighton Barrett—was grinning from ear to ear.

It was three weeks before the release of Why Are You OK, and a few fans were already screaming for the first single. Catchier than a norovirus on a Disney cruise, “Casual Party” could be considered the domesticated sequel to “Weed Party,” from the group’s 2006 debut. “‘Weed Party’ is really the same song as ‘Laredo’ and ‘Casual,’” says Bridwell in a backstage interview before the show, nursing a bottle of Miller Lite and tugging on his beard as he responds. “I forget that I’m rewriting the same chord structures over and over—but I’m grateful for it.”

Bridwell has never been shy about acknowledging his limitations or when he’s been pushed beyond them. That, by and large, is how he describes 2012’s Mirage Rock, BOH’s minor fiasco of a classic-rock experiment with storied producer Glyn Johns—an album that alienated some fans. “It’s currently the black sheep (of our catalog). We were gearing the material to what he liked, whether we knew it or not,” says Bridwell of the collaboration with Johns, whose many credits include Who’s Next, Desperado and Led Zeppelin’s debut.

The whole experience did a job on Bridwell’s confidence, and he found himself at a creative impasse when it came time write his next batch of tunes. “I was gun shy as hell from the last record,” he says. “I was going for the clever wordplay before I even figured out what the story was.”

Produced by Jason Lytle, nudged toward the finish line by Rick Rubin and mixed by Dave Fridmann, Why Are You OK is a return to form for Band Of Horses—the point of reference being the epic wistfulness and exacting studio craft of 2010’s Grammy-nominated Infinite Arms. Like that record, just about everything on Why Are You OK was fretted over, reworked, refined and fretted over some more. Curiously, one of its best tracks, “In A Drawer”—with its guest vocal from J Mascis—is actually an extensively revised leftover from the Infinite Arms sessions. “We were tweaking this album until the very end,” says Bridwell.

But while Infinite is lush, layered and tightly honed, Why has an airy open-endedness befitting its title. Melodies meander and textures unravel as Bridwell mulls the duality of fatherhood and the samey nuances of the homebody lifestyle. One minute, he’s reveling in the boredom and predictability of domestic life on the album’s ambling bookends “Dull Times: The Moon” and “Even Still”; the next, he’s contemplating an untimely exit (“Barrel House”) and questioning his sanity (“Throw My Mess”).

“It’s about the balance of family and this crazy life I’m living,” says Bridwell. “It’s just busy as hell at home. When I’ve been away awhile, my wife will throw a baby at me as soon as I get in the door. I can’t be askin’ to go spend a week in a cabin to possibly write a song or something.”

Uncertainty in the face of mounting obligations is a common thread running through the tracks, most of which were written by Bridwell at home during the off hours between carting around his girls, changing diapers, fixing meals and generally carrying his own weight as a husband and dad. “We built this home in Mount Pleasant, just across the river from Charleston,” says Bridwell. “All the houses have to be on stilts because of the floodplain, so there’s this big garage. I just found a corner and hung out down there quite a bit,. There’s a whole lot of real life in this album— and even if that sounds boring, it’s not boring to me. It’s fuckin’ crazy.”