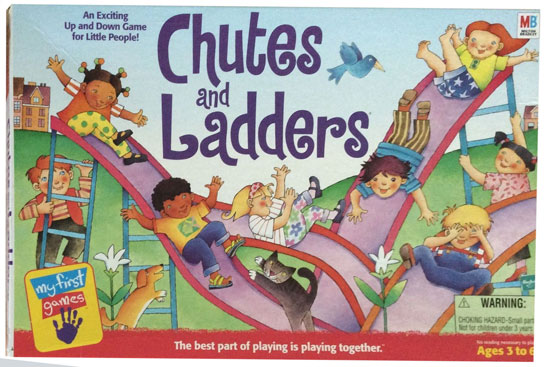 Harrison: If the I Ching was a game tracking your life’s journey, it wouldn’t so much resemble roulette as it would Chutes And Ladders. You know, the children’s board game where you try to go from start to finish, thumping a spinner that settles on a number from one to six to indicate how many spaces you advance? And along the way when you land on a ladder you take a shortcut up, and when you land on a chute you slide back down. The distance you climb or fall depends upon the good deed or infraction depicted on the square. The pulling of the cat’s tail, for instance, sends you down, whereas washing your dad’s car sends you up. It’s all very karmic. But if it were the I Ching, after you reached the end, you’d start all over again. Because the point is, we all experience everything. It’s just that some of us are more inclined to find the ladders, and for others of us, it’s the chutes. I know a lot about the chutes. I’m currently approaching one that’s fooled me before and I’m dangerously close to it again as I write this, hoping my posterior doesn’t have a date with terra firma anytime soon. The I Ching would call this particular chute 23. “Splitting Apart” or “Falling Away,” and it’s a big one. It refers to a situation or relationship in which one has left, or is being tempted to leave, the path of their well-being and personal integrity. Of course, we all succumb to the temptation of dangerous situations at some point, especially when they concern the heart, perhaps asking, “What would happen if I just … arrrrgh! Damn, back to the start!”

Vamping on Mark Twain, Edna St. Vincent Millay famously once said, “Life isn’t just one damn thing after another … it’s the same damn thing over and over and over again.” The Who sang, “Won’t get fooled again.” And Cotton Mather has chosen to weigh in with a song about “splitting apart” called, “The Queen Of Swords,” which you can find on our new record. Now if you’ll excuse me, I have a date with the ground.

“I loop I”
Heart’s iteration
The smartphone sent—in error
And through karmic calculus reveals
My life an exhibit of lessons unlearned
Better to see the world as a lost dog you took in
No questions asked
His past your past, his lost eyes your eyes
And cease all this needless keening
Towards the night grasses for late meaning
Their whisperings koan long since deciphered
And left back at the truck stop
But on this day, Mark Twain, I finally remembered something
And wanted to get your guidance
“My dear boy, you return to those high grasses
To ask your memories be interred in this here conch shell
Then you lift it to you ear like so
And listen to what the roiling ocean
Told this old salt long ago
‘I loop I'”