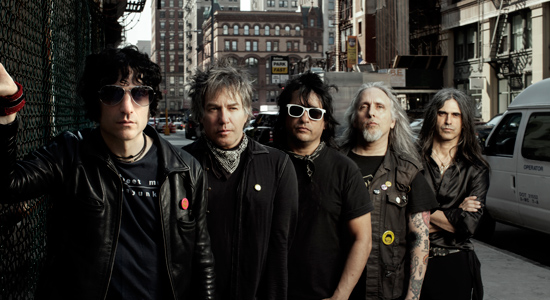 It was a painfully clear message that fourth-generation New Yorker Danny Sage received in a local bar late one hard-drinking night a few years ago: His hometown was changing. Fast. Not recognizing the guitarist as one of the founding members of Big Apple garage-punk trailblazer D Generation, a snotty, disrespectful millennial kept mouthing o until he went too far.

“So I finally said, ‘OK—let’s go to the curb,’” the guitarist says. “And the guy literally replied, ‘If you touch me, I’ll sue you! My dad is so and so, the famous lawyer!’ And I just started laughing, it was so embarrassing. I’d rather get punched in the face than whine about how my daddy is somebody important.”

And that, in a nutshell, is the brash street-tough spirit crackling through Nothing Is Anywhere, D Generation’s first new album in 17 years, which includes the same scrappy gang from its eponymous 1994 debut—Sage (who also produced), vocalist Jesse Malin, bassist Howie Pyron, guitarist Richard Bacchus and drummer Michael Wildwood. It’s a defiantly New York collection of working-class anthems that celebrates the band’s gritty urban past (“Apocalypse Kids,” “Queens Of A,” “Hatful Of Rain,” “Not Goin’ Back”) while sneering at the gentrification and pretentious poseurs corrupting its city’s culture (“Militant,” “Rich Kids,” “21st Century Blues,” churning stomper “Mercy Of The Rain,” on which Malin ominously growls, “Everybody wants this year’s model/Everybody wants to take your place”). After calling it quits with a 1999 farewell gig at Coney Island High, these old schoolers are back, angrier than ever and ready to take that fight outside.

It’s no coincidence that many Nothing lyrics ring with the Whit Stillman-ish veracity of overheard pub conversations, albeit knuckle-headed ones. Both Sage and Malin are part owners of separate New York bars—Dreambaby and Niagara, respectively. And they’ve spent many evenings at their establishments, quietly drinking and listening to some often incredibly shallow dialogue.

“It’s just inescapable,” says Sage, who relocated to Los Angeles after the breakup and worked as a personal assistant to a publishing exec before getting homesick. “In D Gen, we all come from here, and from middle-class backgrounds at best. But these people? They’re all über-wealthy, they’re not from the city, and they’ve never been told no in their life. They moved here seven years ago, and they’re an authority on New York culture, but they don’t know what the fuck they’re talking about. And they have no natural predators. I always tell them, ‘If the city was like it was when I was a kid? You’d be on the back of a milk carton by now.’”

Sage believes that this lack of awareness is aggravated by the impersonal digital age. “People are just oblivious,” he swears. “I’ll see these girls going home at six in the morning, walking down the middle of Avenue A and carrying a pair of heels, bombed out of their minds, and I can’t believe that goes on in any city, not just mine. And it goes for guys, too—maybe they’re a tough kid in their hometown in Ohio. But I don’t know if that counts for much on the Lower East Side at five o’clock in the morning.” It also riles him that many so-called Gotham outfits have only resided in Williamsburg for a few months. “That’s not what a New York City rock ’n’ roll band is,” he says. “So there’s some of that in our album, too, like, ‘Fuck you. We’re here, and this is the real deal’.”

Why regroup now? The timing was just right, Sage says. Year after year, D Gen kept getting reunion offers from Spain, until the band finally accepted. That turned into more overseas dates, then testing the songwriting waters, then cranking out more than 50 kinetic rockers. After tentatively recording more than a dozen cuts with Ryan Adams producing, the group opted to let Sage take the reins, track- ing the material cheaply—and more garage- gutteral—in his basement studio. “We’re huge Ramones, Clash, Pistols and Cheap Trick fans,” he says. “We wanted it to be murky and nasty, like the first Cheap Trick album.”

Politically, D Generation thought returning in this positively surreal election year made sense, too. “It’s like a Nero thing,” he says. “If the fall of Rome is going to happen, you need a little fiddling while it’s all going down. So crank up our album—play it as loud as you can!”