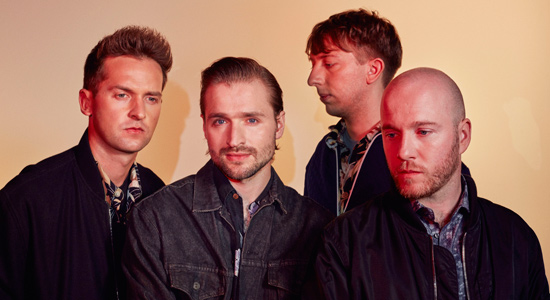 Some artists might conceive an entire album around simple, relatable themes, like love, loss or heartbreak. But brainy British aesthete Hayden Thorpe set his thematic sights a bit higher on Boy King, the latest thoughtful treatise from his art-rock outfit, Wild Beasts. On ambitious numbers like “Big Cat,” “Tough Guy,” “Alpha Female,” “He The Colossus” and the sinister, synth-throbbing “Eat Your Heart Out Adonis,” the operatic-voiced artist had one concept in mind.

“This record is about the id and the primal desires—or primal functions—of all these aggressive traits, and how the murderous and sensuous desires coexist,” he says. “A vile man can also be a very tender, caring man, as can a woman. I know I have the impulse to want to murderously eradicate my rivals. Yet I’m also capable of being compassionate and protective of them as well.”

Pretty lofty, as songwriting goals go. But Thorpe thinks it all started with his realization that—since sidling serpent-like onto the U.K. music scene with Wild Beasts’ truly unclassifiable, falsetto-trilled 2008 debut Limbo, Panto and surreal singles like “Brave Bulging Bouyant Clairvoyants”—he had found the notoriety and success he’d been seeking since forming the group with guitarist/co-vocalist Ben Little in high school. But be careful what you wish for, as they say.

“I suddenly realized that the momentum and the force with which I’d propelled my way through to that point hadn’t fixed the things that I thought it was going to fix,” he says. “I’d become this guy that traverses the Earth for his work, a guy who can languish in self-absorption. But the anxieties and insecurities that I had when I was a boy were still with me.”

By reading a series of self-help books by authors like Alain de Botton—and studying the role masculinity plays in our culture—the vocalist reasoned his way out of his situation. As a kid growing up in England’s pastoral Lake District, he had an awestruck take on what being an adult male signified. A man was a commanding, all-conquering hero then, almost indestructible.

“But now I’ve realized that the crown weighs heavy,” he says. “So I guess my existential crisis was about the gap, the space in between what I thought I should be and what I was. So rather than constantly trying to forge your way across that gap, I chose to just be in the abyss, allow myself to bathe in it.”

The societal norms Thorpe examined extended to his own traditionally defined one as a singer in a rock band. He vacillated; was he wearing a metaphorical mask and becoming some larger-than-life creature? Or was he secretly disgusted by the whole transformative process that suborned his true self, every time he took the stage? He understood that it was power he was wielding. But how righteously? And was it macho to even admit such vulnerabilities?

“When you perform live, you exist in an altered state that only those who’ve been there can appreciate,” he says. “You are in a timeless state—there is no before, there is no after. And we can be many people at once, I’ve discovered. In order to be the hyper-real performer, you might have to curl up in a ball and weep afterward.”

Musically, Little was sailing the same turbulent tides. Boy King started with aborted writing sessions with U.K. pals Disclosure, then segued into the composition of what Thorpe imagined would be a neo-soul album. But Little kept bringing more and more industrial-strength filigrees into the studio, until a muscular, stripped-down new Wild Beasts emerged. They trimmed off even more fat—and falsetto—in Dallas, with producer John Congleton. The set buzzes like an angry bumblebee, barely contained inside a Mason jar.

“It has that element of masochism about it, like, ‘Fuck you, glass! Fuck you! Fuck you! I’m going up against you again.’” says Thorpe.

Additionally, Thorpe was going through a breakup with a girlfriend during the whole Boy King process. “And the energy you can harness, the kind of supernova that happens on those occasions? It really corrupts your world view in ways that can really reveal things,” he says. “It cracks open the Earth, and you can look pretty far down.”