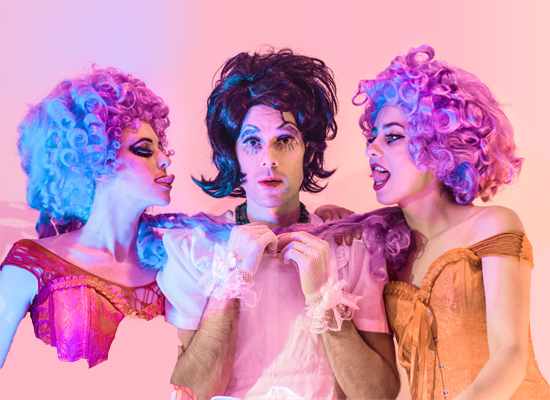 2016 marks two full decades of of Montreal’s mercurial, miraculous existence—as well as the tragic losses of perhaps its two most crucial guiding influences. Typically, though, the band’s 14th LP offers nothing so tidy as a summing-up or backward-glancing response to these or any other milestones, not even (or rather, not consistently) Kevin Barnes’ newfound singleness following the marital dissolution so tortuously chronicled on last year’s punk-addled Aureate Gloom. Indeed, despite kicking off with an apparent statement of newly confident, outward-looking purpose—bullish, woozy electro-bounce “Let’s Relate”—Innocence Reaches winds up as perhaps the least sonically and conceptually well-defined of Montreal album thus far.

Things start strong, with some of Barnes’ tightest, most direct tunes in ages, flitting between electronic/dance territory (straight-ahead disco-funk on “My Fair Lady”; Purity Ring-indebted glitch-trap on lovestruck self-abnegation “A Sport And A Pastime”) and the classic rock ’n’ roll excavations of their last couple LPs (the perky, Kinks-y “Gratuitous Abysses”; meandering degradation boogie “Les Chants De Maldoror”). But that initial promise of a relatively undemanding, pop-minded opus—one that might even attract some newbies to the band’s indulgent, persevering fold for the first time since 2007 benchmark Hissing Fauna…—gets waylaid somewhere around the album’s midpoint.

Instead, we get more of the dense, intractable compositions and long-winded lyrical psycho-safaris that have so fascinatingly (but not very danceably) mired Barnes’ last decade or so—“chaos, arpeggiating,” as the title of one six-minute shape-shifter aptly puts it—culminating with “Chap Pilots,” a queasy, furrowed two-chord vamp that plays like a miniature cousin to wallowing Fauna epic “Grotesque Animal” but never reaches for a comparable catharsis. So much for a rebound fling.