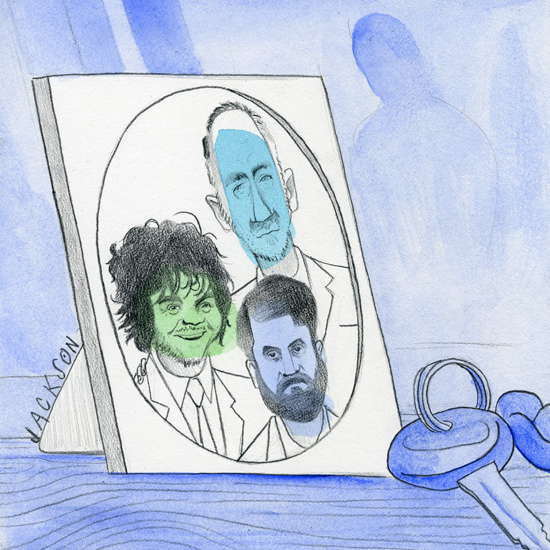 One of the things we’re going to miss when all the rock bands are gone is the way you developed a kind of relationship with the ones you cared about. I was reminded of this phenomenon over the past couple months, when I happened to encounter some of the bands I have deep and long-lasting relationships with.

It started when the Who played a show in Philadelphia a couple months back. I first saw the Who in 1979, when I was 16 years old. I’ve seen them a bunch of times over the years. This show at the Wells Fargo Center was very likely to be my last time, which is one of the reasons I decided to go.

When I saw the Who in ’79, the show was across the parking lot from the arena at the old Spectrum. My friend and I sat on the second level, on the left side of the stage (or, as it might have been called in those days, the Entwistle side). For this show, we were sitting in a similar spot in the newer arena. So there was a weird sense of overlap between the two shows some 37 years apart.

That overlapping quality really drove home the fact that I have had a roughly 40-year relationship with the Who. Pete Townshend is about as close as I get to a hero. He turned 71 a few weeks after the show. He’s an old man now, but there he was playing the same songs with the same urgency that he brought to them in his 20s and 30s. And there was Roger Daltrey, twirling his microphone and letting rip with the occasional vintage scream. He can’t blast away the way he used to, but he still cuts loose a couple times a show. And there was Zak Starkey, who has now drummed with the Who longer than Keith Moon or Kenney Jones ever did. There were a few other musicians, including Townshend’s brother, Simon.

I wasn’t expecting a really great show, but it was. And if I could, in my mind’s eye, see the 1979 Who walking offstage at the end, this time I definitely felt like they were waving goodbye for keeps.

That doesn’t mean my relationship with the band will end. I don’t spend a lot of time listening to old Who albums these days. I don’t have to. Townshend’s music and lyrics are part of my DNA. My personality took shape during years when I listened to the Who and Stones and Kinks and the Clash pretty much continuously. They were surrogate fathers or big brothers or uncles to the young, impressionable me, and that’s the relationship I’ve always had with them.

Just a few weeks ago, I saw Wilco at the Mann Music Center in Philadelphia. I first saw Jeff Tweedy with Uncle Tupelo in 1994. I saw Wilco play two of its first ever shows, in New York and Hoboken, later that year. I’ve seen them any number of times over the past two decades.

There’s a relationship there, but it’s different. If Townshend’s my cool uncle, the godfather who met the punk, then Tweedy feels more like a younger brother or a cousin. We grew up in different places, but we were raised on an awful lot of the same music. I’ve seen him when he was unsure of himself after the breakup of Uncle Tupelo, and I’ve seen him in full command of his band and his audience at a big outdoor shed.

As it happened, this was the absolute best I’ve ever seen. The band played a terrific selection of songs from its entire career. The performances were great, the sound was really good, and it was a perfect June Saturday evening. The second encore was an acoustic set that would’ve been worth the price of admission all by itself.

And it was different. The band’s new album, Portrait Of A Panic Attack, isn’t bad, but it hasn’t really grabbed me the way their earlier stuff did. Scott Hutchison, the band’s songwriter and singer, used to come off as a miserable Scottish chap who had a distinctly depressive worldview. During this show, he was talking about how he’d moved to L.A. He seemed happier. And I’m glad for him, I really am.

If Townshend is my godfather and Tweedy is a distant cousin, then Hutchison is literally young enough to be my son. I watched him grow up, at least as an artist. Like the Who show, I got the distinct feeling that I was seeing Frightened Rabbit for the last time. It’s not that they weren’t good or that I don’t still like their songs. It’s more like I’ve gotten whatever it is I’m going to get from them. I could keep going to shows, but I don’t think I’m ever going to enjoy them the way I did in the past.

There’s still a relationship there, though. If Hutchison feels like a nephew or friend’s son that I watched grow up, then it’s just time to let go. I wish the band well, but we don’t need each other anymore.

There’s no letting go with the Who or Wilco. There may come a time when they stop coming around. That time is obviously near for the Who. But there’s no stopping the impact they’ve had on my life. I feel bad for young people who may never experience that kind of connection to a band, who may not have any bands worth feeling connected to. But that may be easier than having those kinds of connections and then losing them to time and age.

I don’t know which is better. I just know that we’re going to see Paul Simon next week. I bought “Kodachrome” as a 45 when I was 11 years old. I may get to hear him play it 42 years later. So I have that.