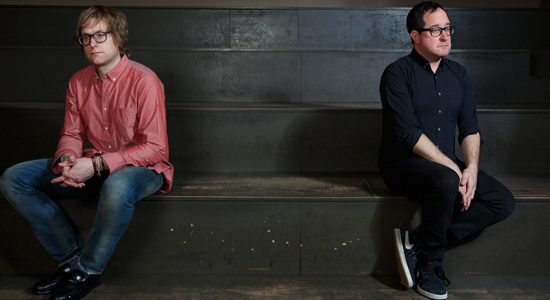 Deluxe editions of the Hold Steady’s first two LPs, Almost Killed Me and Separation Sunday, will be released on CD and vinyl, complete with previously unreleased bonus material, on November 11 via Frenchkiss … She & Him have announced the October 28 release of Christmas Party, the duo’s second Christmas album, on Columbia … White Christmas Blue is the upcoming Christmas album from Loretta Lynn, due out from Legacy on October 7 … Eagle Rock will issue Iggy Pop’s Post Pop Depression: Live At The Royal Albert Hall, in multiple formats on October 28 … October 28 will also see the release of the first career-spanning Roy Orbison anthology, The Ultimate Collection, from Legacy … A new live album from Nada Surf, Peaceful Ghosts (Live With The Babelsberg Film Orchestra), will be released October 28 by Barsuk … The Growlers will issue City Club via Cult on September 30 … Big Boat, the latest album from Phish, is set for an October 7 release on the band’s own JEMP label … Sony will issue the first-ever career-spanning anthology of Depeche Mode’s music videos. Video Singles Collection is due out on November 11 as a three-DVD DigiPak … On October 21, the fifth studio album by Lady Gaga, Joanne, will be released by Interscope Records … A limited-edition six-double-LP vinyl boxed set containing all of Black Eyed Peas’ studio albums, The Complete Vinyl Collection, will be released by UMe on September 30 … Lisa Loeb’s new album, Feel What U Feel, will be available October 7 exclusively on Amazon Music … Paranoid, the 1970 second album by Black Sabbath, will be reissued as a super deluxe edition by Rhino on November 11 … Polyvinyl is celebrating its 20th anniversary with the November 25 release of Polyvinyl Plays Polyvinyl, which will feature tracks by Beach Slang, the Dodos, Deerhoof, of Montreal and more covering tracks by bands from the label’s catalogue … November 11 marks the release of Kristin Hersch’s new double-CD/book combination, Wyatt At The Coyote Palace, via Omnibus … The sixth album by Miranda Lambert, The Weight Of These Wings, is set for a November 18 release on RCA … Sweetback’s self-titled debut turns 20 this year, and to celebrate, Legacy will reissue the album on limited-edition vinyl October 28 … The Traveling Wilburys, Vol. 1 and The Traveling Wilburys, Vol. 3, the two albums recorded by the Traveling Wilburys (comprised of George Harrison, Jeff Lynne, Roy Orbison, Tom Petty and Bob Dylan), will be reissued by Concord Bicycle on October 14 … Descendant/RCA will issue the second album by Colony House, Only The Lonely, on January 13 … On November 11, Omnivore will release High Noon: A 50-Year Retrospective, containing the work of NRBQ.