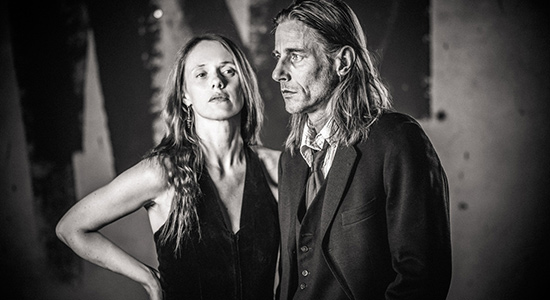 Son Of The Velvet Rat has just released a new LP, Dorado. We previously brought you a piece of the band’s sandy desert record in the form of “Blood Red Shoes,” and today we’re giving you a sample of the group’s favorite songs. Check out the band’s carefully curated mix tape below, and make sure you give Dorado a spin after you’re done. Says Georg Altziebler, “I hope these songs can do for you what they did for me. Let me take you on a little field trip to the remote areas of this strange universe called pop. Off the beaten track, if you will. It’s the very nature of the unexpected and it works for me. When I’m searching for inspiration, I tend to look for the hidden and the obscure. The ditch beside the freeway provides more wondrous wildlife than the main roads of this world. In a way, this applies to music, too.”

Richard McGraw, “Infinite Mind”
Sometimes there is a thin line between tragedy and comedy, in life and in song. Richard McGraw walks that line with style and grace. To quote his fellow New Yorker Elliott Murphy, “You’ll never know what you’re in for.” By the way—that’s one thing most great songs have in common. Listen

Victoria Williams, “Crazy Mary”
The true grande dame of the High Desert—a voice like a pixie’s sister speaking for a beautiful soul. A voice that can go places where most others can’t go. Knowing truths most others will never know. “That what you fear the most could meet you halfway.” Watch

The Adobe Collective, “Desert Shame”
Roll your windows down and listen to this while driving down an endless desert highway. Let the song mingle with the sound of the engine and the sound of the wind. I just did exactly that and I came as close to being one with the world as I possibly can. Listen

Robert Rotifer, “I Just Couldn’t Eat as Much (As I’d Like to Throw Up)”
What a tune, you think before the words start to sink in. Yes, this is a protest song. I assume it protests stupidity. I needed that now, for it seems to be stupidity that rears its ugly head here in the land of the brave and the free and over there across the pond. And thank you Mr. Liebermann for the quote. Watch

Ted Quinn, “If U do”
Ted Quinn is lock and key to the high desert music scene, and because he is a generous man he uses these abilities to open many a door. What’s best, though, is when he opens his heart in his songs. They are amazing and never fail to touch me. Chances are they will touch you, too. Here’s one of his finest. Listen

Lisa Mednick Powell, “Stranger”
Sheer elegance, understated majesty and big production…still, this is such a personal song. You may not be the stranger she serenades, but when Lisa sings, “I’m lost in the wilderness,” you want to go out there to her rescue. If you can’t find her out there, you’ll surely find her in this song. Watch

Urban Desert Cabaret, “Go Away”
You want it darker? You got it. Listen to this song and look up at the stars above Vin Rose Avenue. You might not be alone, after all. Listen

Rags And Bones, “Smokey Joe’s”
Smokey Joe’s seems to be a bar, notable for its clientele. Might also be a scene from Rags And Bones’ cinematic little essay on those legendary guys who, to this day, define the songwriter genre. It’s a funny song, deep as the blues and humble as hell. Listen

Reverend Screaming Fingers, “No Destination”
Back to the open road, where your transmission is on recess for miles, no shifting gears till the light turns blue somewhere beyond the horizon. The guitar wizard won’t tell you where you’re headed. It might be the film set for a ‘70s Spaghetti Western or a night trip through Metropolis. Don’t worry, it’s just a dream. Lay back and enjoy the ride. Listen