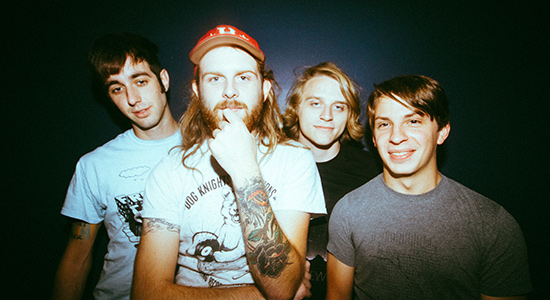 On Sorority Noise’s “A Portrait Of,” singer Cameron Boucher mumbles a little anecdote about what the afterlife might be like—“and they’re playing “The ’59 Sound” in heaven/While the angels were drinking up whiskey and cokes.” Invoking the Gaslight Anthem’s track—a romantic song about death that asks the recently deceased, “Did you hear your favorite song one last time?”—this line is particularly telling for Sorority Noise’s third LP. The image of angels kicking back and getting drunk contrasts painfully with the record’s life on earth, one where the narrator struggles to get out of bed and wonders why they’re not up there in heaven, too.

All of this is to say that You’re Not As __ As You Think is a brutal recollection of the endless, everyday fight against grief. On “A Better Sun,” Boucher numbly recounts a cycle of pain, posturing and self-destruction, all with the same construction of “this is the part where …” In this way, “A Better Sun” presents the quiet moments of grieving (a verse spent listening to music, nodding toward Julien Baker, Into It. Over It. and Modern Baseball) in the same way it presents the loud ones (“This is the part where I explode and destroy/Everything on this god-given earth”). On You’re Not As __ As You Think, the difficulty of loss permeates through every moment.

Because death looms so heavily over this record, it’s no surprise that these songs are often interested in examining a dismayed form of spirituality. “Second Letter From St. Julien” addresses god with defiance and deference in turn, asking, “What’s your god trying to prove,” in one breath and, “Do I make him proud?” in the next. The subject of god certainly leads to some clunky moments (“He’s always trying to fuck me to the tune of my favorite song”), but the record’s conflict with divine power makes for genuinely affective music.

Mike Sapone (Brand New, Taking Back Sunday) helps bring Sorority Noise to a cleaner, more-focused sound, making the record’s more energetic tracks like “No Halo” and “Disappeared” shimmer and explode beautifully. The band’s dynamics are sharper than ever, sounding larger than life in the loud chorus of “No Halo” and intimately melancholy on slow burns like “First Letter From St. Sean.”

The album’s climax comes with “Leave The Fan On,” but it doesn’t feel like a big solution or the beginning of a grand post-grief phase. Here, the narrator still struggles to take care of himself, even failing to brush his teeth in the morning before the big, bombastic outro. But small, isolated closer “New Room” does present a subtle shift, with Boucher giving a bored, practical little solution—“I haven’t been spending enough time alone/Maybe that’s why I feel like I don’t have a home.” It seems like a big, loud ending is warranted for You’re Not As __ As You Think, but Sorority Noise doesn’t let us have it. “New Room” poses a quiet step forward as opposed to a sweeping new era, because grief doesn’t leave in one fowl swoop; in fact, it may not ever leave us. Instead, “New Room” is about finding new ways to cope, little by little.