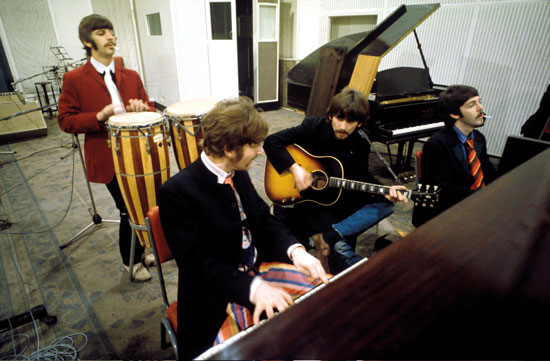 The 50th anniversary of the Beatles’ iconic album Sgt. Pepper’s Lonely Hearts Club Band will be commemorated with special anniversary edition releases May 26 via Apple/Capitol/UMe. The super-deluxe boxed set will include previously unreleased 1992 documentary film The Making Of Sgt. Pepper, as well as previously unreleased session recordings … Sprite Fountain is the new album from the Ruby Suns, due out from Sellout! on June 9 … Low Cut Connie has announced the May 19 release of fourth studio album Dirty Pictures (Part 1) via Contender … New West has signed the Secret Sisters and will issue the duo’s Brandi Carlile-produced new record, You Don’t Own Me Anymore, on June 9 … On May 19, Buffalo Tom’s 1992 album Let Me Come Over will be reissued in honor of its 25th birthday, alongside first-ever live release Live From London, Ulu, 1992 from Beggars Arkive … The debut solo album from A Sunny Day In Glasgow’s Jen Goma (as Showtime Goma), Smiley Face, is set for a June 16 release … So You Wanna Be An Outlaw, the latest album by Steve Earle And The Dukes, will be available from Warner Bros. on June 16 … Game Theory’s final album, 2 Steps from The Middle Ages (originally released in 1988), will be reissued as a remastered and expanded edition June 9 via Omnivore … Capitol/UMe will release a career-spanning best-of collection featuring the work of the Bee Gees, Timeless: The All-Time Greatest Hits, on April 21 … May 15 will see the release of Jason Molina: Riding With The Ghost, a family-authorized biography of Jason Molina, from Rowman & Littlefield … The 40th birthday of Foreigner will be celebrated May 19 with the release of 40, which features 40 hits spanning 40 years, from Rhino … Acoustic In Concert is a new live DVD/CD featuring Simple Minds’ 2016 BBC “In Concert” series performance, due out from Eagle Rock on June 16 … Can has announced the June 16 release of CAN: The Singles on Mute/Spoon … Sony CG will reissue Leftfield’s debut album Leftism on May 5 … On May 5, Alice Coltrane‘s ashram recordings from the ’80s and ’90s will be released to the public for the first time ever, as part of World Spirituality Classics 1: The Ecstatic Music Of Alice Coltrane Turiyasangitananda, a compilation from David Byrne’s Luaka Bop label … A five-disc genre-defining boxed set featuring tracks by the Cure, Joy Division, Bauhaus, Nico and more, Silhouettes And Statues: A Gothic Revolution: 1978-1986 will be available from Cherry Red on June 30 … GospelbeacH is the new project by Brent Rademaker, and debut album Another Summer Of Love will be released June 15 on Alive Naturalsound.