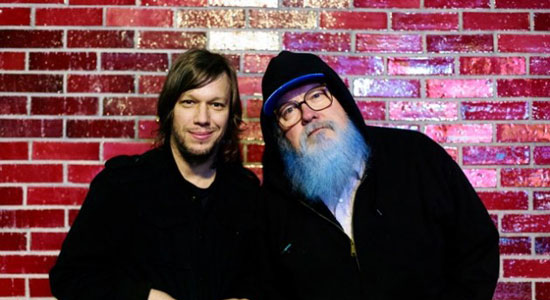 Ever since his departure from Jellyfish at the peak of the band’s brief early-’90s run, Jason Falkner has relished his role as a self-made power-pop iconoclast. R. Stevie Moore’s championing of the DIY recording aesthetic stretches all the way back to the late 1960s, gaining underground momentum during the following decade’s punk explosion. Unlike Falkner, Moore has never been much for restraint, recording more than 400 albums, many of them on handmade cassettes and CD-Rs. For this 18-track collaboration, Falkner wrote just one song—the tunefully sinister “Horror Show”—and co-wrote five others. He curated many of the tunes from Moore’s voluminous, dauntingly diverse catalog. Some were written during the two weeks of recording at Falkner’s Rhetoric studio in Hollywood; a few are snippets of studio banter and (accomplished) instrumental noodling. Fortunately, the whole thing is anchored by moments (“I H8 Ppl,” “Play Myself Some Music,” “Sincero Amore”) when Falkner and Moore sniff out a clever hook and match it with a fully fleshed-out arrangement. As one might surmise, Make It Be casts Falkner as the editor/ringmaster of Moore’s wonky sonic circus—and the results should connect with fans of the former’s innate craftsmanship and the latter’s rampant eclecticism. For the rest of you, it’s about 70 percent wheat and 30 percent chaff.