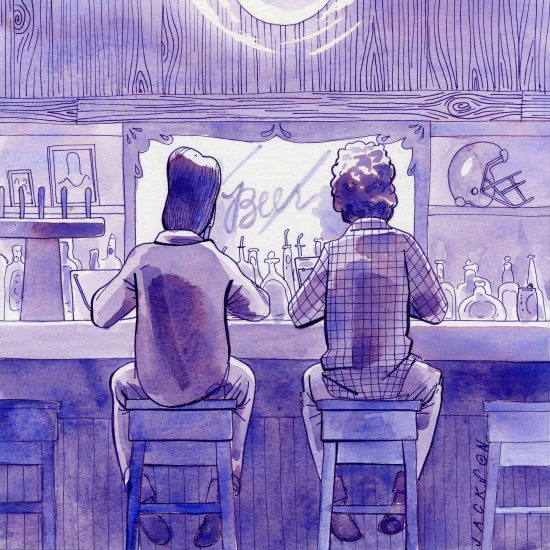 So, as always, you come back here to read the musings of the great Phil Sheridan. Well, sorry, this issue you have me, Eric T. Miller, MAGNET editor-in-chief. To quote Bob Pollard, “I apologize in advance.” You came for the filet mignon, but you’re getting the vegan burger. You can still have a side of fries, though. And maybe a beer if you play nice.

As anyone who reads this column every month knows, Phil has leukemia. As I write this, he’s in the hospital following his second round of chemo and a bone-marrow transplant. I just saw him last weekend. We laughed and cried, but as always, he and I had a great time, just like every time we’ve hung out over the past 23 years. He gave me a bracelet his boss at ESPN sent him. It says: “Team Sheridan. Stay Strong.” So that’s what we’re gonna do: Stay strong.

Phil is one of my best friends. My brother in harm. Has been since when we first met at a Dinosaur Jr show in Trenton, N.J., way back in the day. I knew Phil as a sportswriter from my local newspaper, reading his stuff religiously (as atheists like me do) while in high school. His columns spoke to me. I felt like I was sitting next to him at a bar (not that I had been to a bar at that point), listening to his take on Philly sports. I told my parents back then, “I want to be able to write like Phil Sheridan.” That never happened. Those who can’t write end up editing music magazines. Prior to meeting Phil during college, not long after I started MAGNET, I was visiting my folks, and my dad said, “I saved the newspaper for you.” So the first thing I did, of course, was read Phil. And his sports column mentioned Pavement.

So, old school, I sent Phil a bunch of MAGNETs in the mail and a note saying I was a fan and thought he might dig the magazine. The next week, I got a call from Phil saying he’d already seen MAGNET. (“Picked up the new issue at the airport in Colorado.”) If you watch any ’80s teen movie where the guy doesn’t ask the girl out and regrets it forever, I decided to do the opposite and be bold. I said to Phil, “Do you want to write for MAGNET?” I was certain he would say no. But he said, “Yeah, I’d love to.” I said, “We have this thing called The Back Page, but I’m not sure what it is exactly. I think you could do something good with it.” And, obviously, he’s done it.

Phil has been trying to quit doing The Back Page since 1994. The breakup never took. I wouldn’t allow it—until Phil dropped dead a few years ago from sudden cardiac arrest while jogging but was revived by some really good Samaritans and ended up living. Roob—you’d know him if you saw him (inside-baseball Back Page joke that’s been going on forever) and a friend to Phil and a fellow sportswriter since I was in short pants—took over, kicking and screaming, while Phil recovered. And Roob killed it, al- though he hated doing it, but like I told him, “There is no other person who Phil and I would be comfortable doing this other than you.” Thanks again, Roob. (Though Universal Truths And Cycles is not one of the top three Guided By Voices records of all time, sorry to say, dude.)

I’m not taking this page over. Phil owns this page and always will. It’s his as soon as he’s ready. I’m hoping this is a one-off for me. If not, Roob, I pray (in an atheist way) you’re in fighting shape.

The Back Page is the first thing I read every time we get a new issue of MAGNET. Why? Because I want to re-read Phil bitching and moaning about every little thing that bothers him. Because they’re the every little thing that bothers me. It’s like Curb Your Enthusiasm, but Phil isn’t bald like Larry David. (Wait … post chemo, Phil is way balder than Larry David, but still a handsome devil.)

Phil and I text all the time about stuff like who we think the best drummer in rock is right now (Me: “Ringo’s son.” Phil: “That guy from the National is pretty great.”) It’s like we’re sitting next to each other at a bar. Side note: We got kicked out of a bar once. A dive bar no less. The bartender said, “One and done.” As we were leaving, we ran into a hooker on the street, who had some white fluid around her mouth. She said, “Does it look like I have Krispy Kreme on my face?” Phil turned to me and said, “That was the funniest thing ever.” I agreed.

If Phil wrote this column, he would sum up everything that came before with some pithy line that tied the room together, but I’m not Phil. So this is the best I’ve got: Leukemia isn’t gonna kill Phil. Phil is gonna fucking kill leukemia.

—(not by) Phil Sheridan