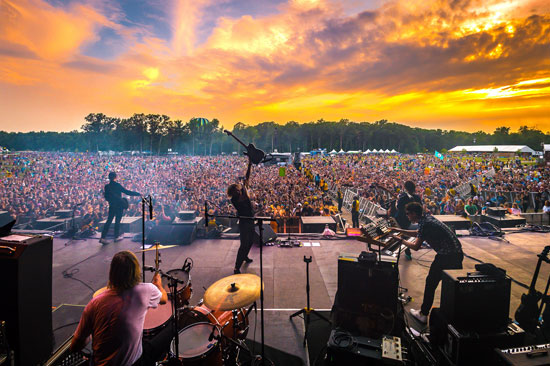 It’s Firefly season, a time every summer when 90,000 giddy, glistening fans descend upon the 750-acre Woodlands in Dover, Del., to watch their favorite artists perform, and discover new ones. Every Father’s Day weekend since 2012, locals witness Dupont Highway bursting with cars packed with camping gear making their annual pilgrimage from across the East Coast and beyond. Over the past six years, the festival has expanded from a modest three-day event to a five-day bonanza featuring 140 multi-genre, multi-generational acts—everything from Bob Dylan to the Weeknd to AFI to Kesha to Weezer to Miike Snow.

Tweaking what was already a fun, efficiently run event, Firefly provided fans the opportunity to curate all aspects of the festival this year, from merch to campground entertainment to food options. Back in December, organizers posted various polls to the festival website so that fans could vote on what they wanted to include in the 2017 iteration of Firefly.

With so much competition and so many new festivals popping up like games in the Apple app store, Firefly’s strategy of fan engagement helps tether their fans to their festival, fostering a sense of ownership. Who wouldn’t want to attend a fest that they helped create? With so many Bumbershoots, Pitchforks and Boston Callings to choose from, it’s hard for fans to figure out where to spend their limited disposable income and PTO time. By being the self-proclaimed “first fan-curated festival,” Firefly is trying to make that decision easier.

Offering such a varied, wide-ranging artist lineup also attracts fans from across every age and demographic, expanding the potential pool of attendees who wouldn’t have previously considered going to a festival. Walking through the Woodlands this past weekend, I witnessed more diversity than any other year. For every glitter-encrusted teenager in daisy dukes waving glow sticks, there was a dad in a polo shirt tucked into khaki shorts with a braided leather belt looking like he was ready for a night at Outback Steakhouse. Apparently Firefly has now replaced many families’ Pocono lake or Jersey Shore trips, a new tradition that should be the envy of all others in the festival industry.

Although Firefly had been underway for close to two days by the time Friday night rolled around, the energy was elevated a notch once the 9 to 5-ers arrived. Weezer, the band that churned out mega hits like “Buddy Holly,” “Beverly Hills” and “Island In The Sun” in the ’90s and early aughts, kicked off the nighttime headliners as the sun sank below the tree line. Frontman Rivers Cuomo sported his signature thick-rimmed specs, and the band offered a predictably pleasant set, playing all of its popular songs that brought me back to the days of middle school, Total Request Live and Napster.

Indie trio Miike Snow, which includes the songwriters behind pop smashes like Brittany Spears’ “Toxic,” got the dance party started with “My Trigger” and “Paddling Out.” Lead singer Andrew Wyatt bounced from keyboard to microphone, from one end of the stage to the other, his voice climbing up to falsetto at times before plummeting into a deep, warbled bass. Their infectious beats filled your diaphragm and excited your cells at the atomic level.

On a sweltering Saturday afternoon the next day, 24-year old British alt-pop riser Bishop Briggs ran laps around the Main Stage in an oversize black sweatshirt and pants. Her dynamism never wavered as she belted out hits like “Wild Horses,” “River” and “Have Mercy,” underscoring her brooding, soulful voice. Combined with thudding beats and growling guitars, she sounded like a mash-up of Adele and Pretty Lights.

The Naked And Famous drew a large crowd at the Lawn Stage as dusk settled over the festival grounds that evening. The indie electronic band from Middle Earth broke onto the scene in 2010 with “Young Blood,” which was featured in numerous promos and commercials for shows like Property Brothers and The Leftovers. Alisa Xayalith’s ethereal vocals, combined with fuzzy synths and strong beats, exhibited their CHVRCHES-like sound on songs like “Punching In A Dream.”

After four days of 90-degree heat, marathon day-drinking and countless half-mile trudges from one stage to the next, you wouldn’t blame festival-goers for throwing in the towel and heading home early to beat Shore traffic. But on Sunday, the only evidence of flagging energy was the increase in cycle rickshaw trips from the parking lot to the front entrance of the festival. And the artists the fans stayed to see did not disappoint.

MisterWives, the cheerful pop/rock band from New York, made a triumphant return to Firefly during an early evening set. “Two years ago we were the opening band at 2 p.m. on Thursday, and we had to camp here because we didn’t have money for a hotel room,” frontwoman Mandy Lee told the crowd of several hundred people. “Don’t give up on your dreams!” Watching them play, it was clear to all why they have had such a meteoric rise since their first Firefly. All six group members acrobatically juggled multiple instruments throughout each song as they danced and bounded around onstage, displaying their musical talent, stamina and pure joy.

When electro-rock duo Phantogram took the stage as night fell, all eyes locked onto lead singer Sarah Barthel as she emerged in her signature superhero-esque ensemble, with thigh-high boots and a cape. She and childhood friend and bandmate Josh Carter played their moody, rhythmic hits like “When I Was Small” and “You Don’t Get Me High Anymore,” helping to close out the festival on a high note.

Firefly will enter into its seventh year of existence. Like every year, organizers will debrief this past weekend, survey the festival landscape and try to think up ways to bring back past attendees and to attract new fans. They’ll also assess the fan curation experiment, and figure out how to keep families away from the Poconos and Shore over Father’s Day weekend. At this point, however, Firefly’s excellence has been established. I’ve made it my own tradition, and I’ve already booked my Hampton Inn for 2018. 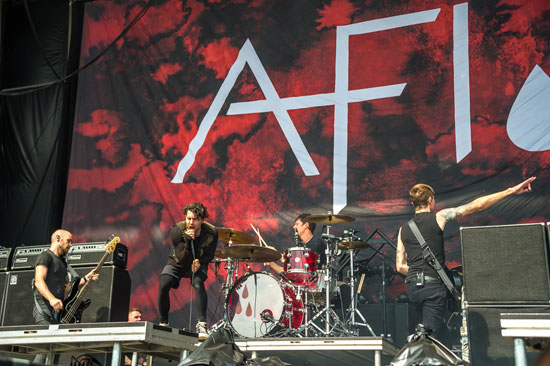 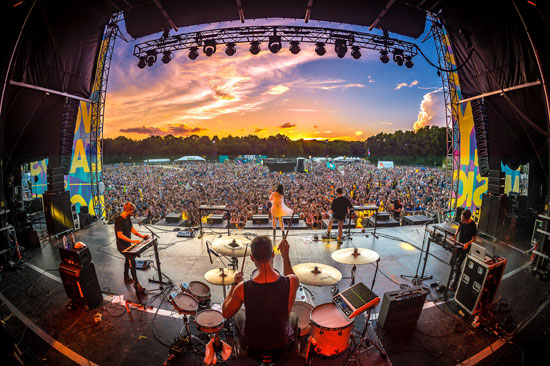